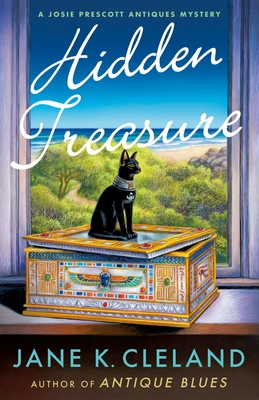 This is book number 13 in the Josie Prescott Antiques Mysteries series.

The discovery of a mysterious antique trunk leads to a disappearance—and murder—in the latest in this beloved cozy series set on the rugged New Hampshire coast, Jane K. Cleland's Hidden Treasure.

When antiques expert Josie Prescott finds a mysterious trunk, no one thinks it could lead to murder. Josie, the owner of Prescott’s Antiques & Auctions, and her new husband, Ty, have finally found their dream home, a Victorian beauty on the beach known in the town of Rocky Point as the “Gingerbread House.” It was recently vacated by Maudie Wilson, an aging widow, whose concerned nieces have moved her into a nearby assisted living facility. Josie befriends Maudie, who seems surprisingly sharp, considering her family’s doubts about her soundness of mind.

As Josie and Ty joyfully begin renovations on the Gingerbread House, the nieces report that Maudie, in her forgetfulness, may have left behind an old trunk, which she’s desperate to get back. Sure enough, Josie finds the trunk inside a hidden compartment, and within it a jewel-encrusted box holding a sculpture of a cat. Josie can understand the sense of urgency about getting the objects back—they look valuable, and not just in the sentimental sense.

But when Josie goes to return the box to Maudie, the woman has vanished. And on the floor of her empty apartment lies a corpse, a woman bludgeoned to death. Sick with worry for Maudie’s safety, Josie begins to piece together the clues to the murder. Everyone around her seems to want to pitch in, from Maudie’s family, to the receptionist at the facility, to the young couple helping Josie with her renovations, but with the killer so close to home, Josie has to be on her guard.

JANE K. CLELAND once owned a New Hampshire-based antiques and rare books business. She is the author of nearly twenty novels and short stories in the beloved Josie Prescott Antiques mystery series, is the winner of two David Awards for Best Novel, and has been a finalist for the Agatha, Macavity, and Anthony Awards. Jane is the former president of the New York chapter of the Mystery Writers of America and chairs the Wolfe Pack’s Black Orchid Novella Award in partnership with Alfred Hitchcock Mystery Magazine. She won the Agatha Award for both of her books on the craft of writing, Mastering Suspense, Structure and Plot and Mastering Plot Twists. She is part of the fulltime English faculty at Lehman College, a contributing editor for Writer’s Digest magazine, and lives in New York City.

"Delightful....Full of red herrings, the twisty plot builds to a satisfying conclusion, and descriptions of each authentication process are a bonus." —Publishers Weekly on Hidden Treasure

"Very clever...The characters are realistic, and the excitement and love of antiques permeate the book and make for really enjoyable reading." —Marilyn's Mystery Reads

“As fascinating as its predecessors with plenty of details that capture the excitement of the hunt....Also appealing are the engaging and sympathetic characters who bring warmth to this cozy mystery.” —Library Journal (starred review) on Antique Blues

"Suspects and motives abound...Cleland has created an appealing character in Josie, who has grown and prospered in a most satisfying way." —Publishers Weekly on Antique Blues

“A cozy replete with antiques lore, likable characters, and a more complex mystery than usual.” —Kirkus Reviews on Glow of Death