A Dream So Dark (The Nightmare-Verse #2) (CD-Audio) 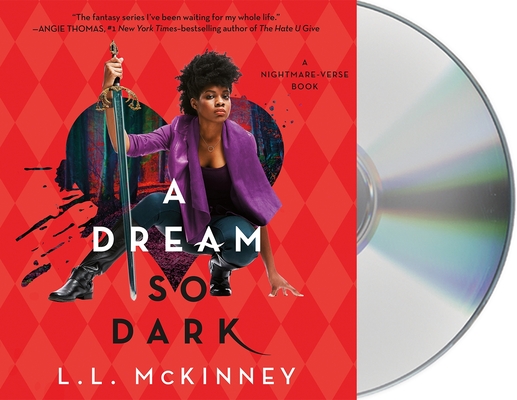 A Dream So Dark (The Nightmare-Verse #2) (CD-Audio)

This is book number 2 in the The Nightmare-Verse series.

"With memorable characters and page-turning thrills, A Blade So Black is the fantasy book I've been waiting for my whole life. Alice is Black Girl Magic personified." — Angie Thomas, #1 New York Times-bestselling author of The Hate U Give

In L. L. McKinney's A Dream So Dark, the thrilling sequel to A Blade So Black, Alice goes deeper into a dark version of Wonderland.

Still reeling from her recent battle (and grounded until she graduates), Alice must abandon her friends to complete her mission: find The Heart and prevent the Red Lady's rise. But the deeper she ventures into Wonderland, the more topsy-turvy everything becomes. It’s not until she’s at her wits end that she realizes—Wonderland is trying to save her.

There’s a new player on the board; a poet capable of using Nightmares to not only influence the living but raise the dead. This Poet is looking to claim the Black Queen’s power—and Alice's budding abilities—as their own.

Dreams have never been so dark in Wonderland, and if there is any hope of defeating this mystery poet’s magic, Alice must confront the worst in herself, in the people she loves, and in the very nature of fear itself.

"A dark, thrilling fantasy-meets-contemporary story with a kickass heroine." —Bustle

Named one of The Root’s 100 Most Influential African-Americans of 2020, L.L. McKinney is a writer, a poet, and an active member of the kidlit community. She’s an advocate for equality and inclusion in publishing, the co-founder of Juneteenth Book Fest, and the creator of the hashtags #PublishingPaidMe and #WhatWOCWritersHear. She’s also a gamer girl and an adamant Hei Hei stan. She is the author of A Blade So Black, A Dream So Dark, and A Crown So Cursed.