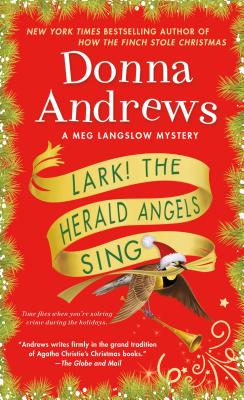 This is book number 24 in the Meg Langslow Mysteries series.

It’s Christmastime in Caerphilly. Meg, full of holiday spirit, is directing a nativity pageant when she finds a surprise in the manger: a living, breathing baby girl. A note from the mother says it’s time for the father to take care of her—and implicates Meg’s brother, Rob, as the father. A DNA test can reveal the truth but Rob’s afraid that suspicion itself could derail his plan to propose to the woman he loves. So Meg, always up to the task, makes it her merry business to find proof of paternity. But her investigation into the life of Lark, as the infant is named, leads to more questions than answers. Is someone using Lark as a pawn in a sinister game? And why does Meg feel that she is the one being threatened most of all?

"Andrews manages her large cast with dexterity and drops clues to the culprits’ identity, but the ending will catch most readers by surprise." —Publishers Weekly on How the Finch Stole Christmas!

"[A] satisfying, humorous entry in the long-running series." —Booklist on How the Finch Stole Christmas!

"Intrigue...amusement...Andrews reliably delivers. She also manages to slip in profundities and sentiments that warm the heart."—New York Journal of Books on Nightingale Before Christmas

The small town of Caerphilly, VA and its inhabitants provide a charming backdrop for this Christmas cozy.—Library Journal on Nightingale Before Christmas

"Meg, as well as her quirky extended family, makes this humorous cozy a holiday treat."—Booklist on Duck the Halls

"Andrews leavens the action with her trademark humor, including dueling Christmas dinners and an extravagant—and extravagantly funny—live nativity scene."—Publishers Weekly on Duck the Halls

"Produces at least one chuckle—and sometimes a guffaw—per page. Joy to the world, indeed."—Richmond Times-Dispatch on Six Geese A-Slaying