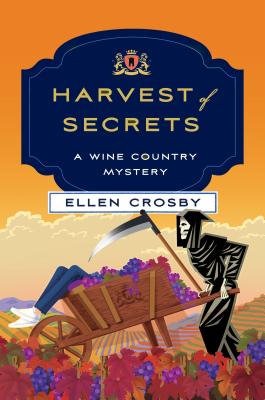 This is book number 9 in the Wine Country Mysteries series.

The search for the killer of an aristocratic French winemaker who was Lucie Montgomery’s first crush and the discovery of dark family secrets put Lucie on a collision course with a murderer.

It’s harvest season at Montgomery Estate Vineyard—the busiest time of year for winemakers in Atoka, Virginia. A skull is unearthed near Lucie Montgomery’s family cemetery, and the discovery of the bones coincides with the arrival of handsome, wealthy aristocrat Jean-Claude de Marignac. He’s come to be the head winemaker at neighboring La Vigne Cellars, but he’s no stranger to Lucie—he was her first crush twenty years ago when she spent a summer in France.

Not long after his arrival, Jean-Claude is found dead, and while there is no shortage of suspects who are angry or jealous of his ego and overbearing ways, suspicion falls on Miguel Otero, an immigrant worker at La Vigne, who recently quarreled with Jean-Claude. When Miguel disappears, Lucie receives an ultimatum from her own employees: prove Miguel’s innocence or none of the immigrant community will work for her during the harvest. As Lucie hunts for Jean-Claude’s killer and continues to search for the identity of the skeleton abandoned in the cemetery, she is blindsided by a decades-old secret that shatters everything she thought she knew about her family. Now facing a wrenching emotional choice, Lucie must decide whether it’s finally time to tell the truth and hurt those she loves the most, or keep silent and let past secrets remain dead and buried.

Harvest of Secrets is another corking mystery from author Ellen Crosby.

ELLEN CROSBY is the author of the Virginia-set Wine Country Mysteries series, which began with The Merlot Murders. She has also written a mystery series featuring international photojournalist Sophie Medina, and Moscow Nights, a standalone.

Previously she was a freelance reporter for The Washington Post, Moscow correspondent for ABC News Radio, and an economist at the U.S. Senate.

"A corker of an entry in a series that often pairs fascinating historical mysteries with clever modern ones."—Kirkus Reviews

"Well-crafted. Crosby is a steady hand in unraveling the tangled subplots, and she populates Lucie's world with sympathetic secondary characters who come fully alive. Fans of contemporary regional mysteries will be well satisfied."—Publishers Weekly

"For admirers of the author's earlier mysteries, and readers of Ellie Alexander's Death on Tap or Joyce Remel's "Brewing Trouble" series."—Library Journal

"The winery frame story supports the multifaceted plot, as do details layered into the tale about genealogical research, forensic anthropology, and DNA testing."—Booklist

"Ellen Crosby delights...with a writing style that's as crisp as some of Lucie's wines, and just as enjoyable."—Mystery Scene

"Crosby continues to display her superior narrative skills, her deft advancement of her recurring characters’ lives and her knowledge and love for the region of which she writes. Thought-provoking as well as entertaining, it marks another exceptional effort by Crosby."—The Free Lance-Star

Praise for The Vineyard Victims:

"Crosby concocts her usual absorbing plot, into which she blends her knowledge of Virginia's wine country. And in Lucie, she further develops a credible and captivating character who once again wins the reader's heart. Full-bodied and crisp, The Vineyard Victims goes down with ease."—Richmond Times-Dispatch

Praise for The Champagne Conspiracy:

“The wine industry and the ins and outs of running a winery provide the background for this mystery with its well-drawn characters and satisfying puzzles. Recommend to… anyone who enjoys mysteries in which historical research plays a key role.” —Booklist

“Crosby has constructed a neat whodunit, supported by enough wine-making lore to give it some extra body.” —The New York Times on The Merlot Murders

“Like a fine wine, Crosby’s debut is complex and intricate… This is a terrific kickoff to what promises to be a highly satisfying new series." —Publishers Weekly on The Merlot Murders

“Crosby imbues her work with a killer plot (and surprising conclusion), agreeable characters, polished prose and colorful detail. . . . Blended, they provide a superior yield.” —The Richmond Times-Dispatch on The Sauvignon Secret

“The meticulously researched historical background—always a hallmark in Crosby’s novels—is nicely balanced by an intriguing mystery.” —Booklist on The Vintage Vendetta

“If wine be the nectar of the gods, Ellen Crosby’s series of wine-flavored mysteries is a heady quaff for us mere mortals… The Bordeaux Betrayal is a long swallow of pure delight.” —Easton (MD) Star-Democrat