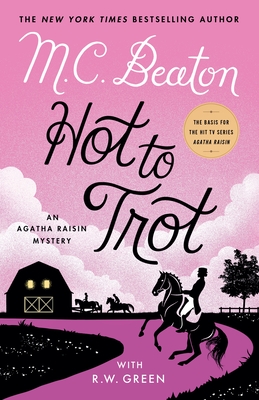 This is book number 31 in the Agatha Raisin Mysteries series.

When Private Detective Agatha Raisin learns that her friend and one-time lover Charles Fraith is to be married to a mysterious socialite, Miss Mary Brown-Field, she sees it as her duty to find out what she can about the woman. Coming up empty, Agatha—out of selfless concern for Charles, of course—does the only sensible thing she can think of: she crashes their wedding, which ends in a public altercation. Nursing a hangover the next morning, she gets a phone call from Charles, with even more disturbing news: Mary has been murdered.

Agatha takes on the case, and quickly becomes entrenched in the competitive equestrian world, in which Mary had been enmeshed—as well as the victim’s surprisingly violent past. Agatha finds no shortage of motives among a wide range of characters, from Mary's old riding competitors, to enemies from her schoolgirl days, to her surly father, who threatens Agatha to mind her own business. Meanwhile, the police department has its money on another suspect: Agatha. Will she track down the criminal in time, or end up behind bars herself?

A long-time friend of M. C. Beaton, R.W. GREEN has written numerous works of fiction and non-fiction. He lives in Surrey with his family and a black Labrador called Flynn.

"M.C. Beaton has a foolproof plot for the village mystery." —The New York Times Book Review

"Beaton has a winner in the irrepressible, romance-hungry Agatha." —Chicago Sun-Times

"Glorious...Love it. Live it. Be the better for it. Far more invigorating than a tonic." —Frost Magazine

"One of the most charismatic private eyes walking on the mild side of crime fiction...deliciously outrageous."
—Shots