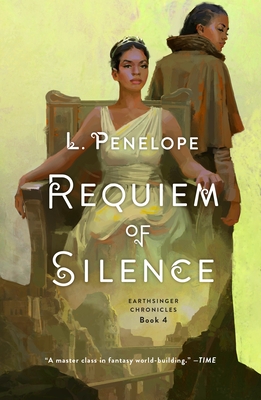 This is book number 4 in the Earthsinger Chronicles series.

In the vein of K. Arsenault Rivera and V.E. Schwab comes L. Penelope's Requiem of Silence, the epic conclusion in the stunning Earthsinger Chronicles.

Civil unrest plagues the nation of Elsira as refugees from their old enemy, Lagrimar, seek new lives in their land.

Queen Jasminda is determined to push the unification forward, against growing opposition and economic strife. But the True Father is not finished with Elsira and he may not be acting alone. He has built a powerful army. An army that cannot be killed. An army that can only be stopped by Nethersong and the help of friends and foes of Elsira alike to stop it.

Former assassin Kyara will discover that she is not the only Nethersinger. She will need to join the others to harness a power that can save or end Elsira. But time is of the essence and they may not be ready by the time the True Father strikes.

Sisterhood novitiate Zeli will go to the reaches of the Living World to unlock a secret that could save the kingdoms. When armies meet in the battlefield, a new world will be forged--whether by the hands of gods or men, remains to be seen.

"Penelope crafts well-earned conclusions for each of her complex characters." - Publishers Weekly

"A worthy, heartening, epic finale to a series brimming with magic and romance." - Booklist