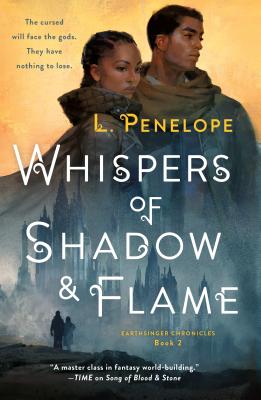 This is book number 2 in the Earthsinger Chronicles series.

The Mantle that separates the kingdoms of Elsira and Lagrimar is about to fall. And life will drastically change for both kingdoms.

Born with a deadly magic she cannot control, Kyara is forced to become an assassin. Known as the Poison Flame in the kingdom of Lagrimar, she is notorious and lethal, but secretly seeks freedom from both her untamed power and the blood spell that commands her. She is tasked with capturing the legendary rebel called the Shadowfox, but everything changes when she learns her target’s true identity.

Darvyn ol-Tahlyro may be the most powerful Earthsinger in generations, but guilt over those he couldn’t save tortures him daily. He isn’t sure he can trust the mysterious young woman who claims to need his help, but when he discovers Kyara can unlock the secrets of his past, he can’t stay away.

Kyara and Darvyn grapple with betrayal, old promises, and older prophecies—all while trying to stop a war. And when a new threat emerges, they must beat the odds to save both kingdoms.

"Wonderful characters, unique setting, and an engaging romance set against the backdrop of ancient magic. I can't wait to see what L. Penelope will do next."--Ilona Andrews, #1 New York Times bestselling author

"Prepare to be hooked. SONG OF BLOOD AND STONE is brimming with captivating lore, unique magic, and plot-turns you never saw coming. L. Penelope has written your next fantasy obsession." --Elise Kova, USA Today bestselling author of The Loom Saga

"Set against a backdrop of myth and magic, Song of Blood and Stone is a sweeping tale of love, duty and destiny that feels as urgent as it does timeless.” - Rebecca Roanhorse, author of TRAIL OF LIGHTNING

“Song of Blood and Stone is an enchanting journey through a world more relevant than ever. Wars between Gods, romance, action—it’s everything I love all at once.” - K Arsenault Rivera, author of THE TIGER’S DAUGHTER

"Song of Blood and Stone is a sweeping journey of magic, romance, sacrifice, and self-discovery. These heartwarming characters, their trials and adventures, and their love for each other will stay with you long after the book ends." - Amanda Bouchet, USA Today bestselling author of The Kingmaker Chronicles

"Song of Blood and Stone is a thrilling and complex journey through a beautifully rendered world that is imaginative, magical, and eerily similar to our own. A terrific read!" - Daniel Jose Older, New York Times bestselling author