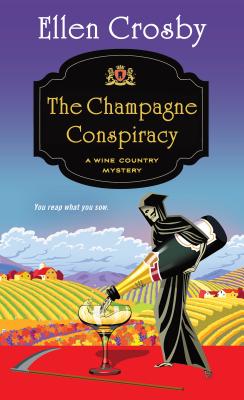 This is book number 7 in the Wine Country Mysteries series.

Love, blackmail, murder, and intrigue are blended like a complex full-bodied wine in the latest installment of Ellen Crosby’s Virginia vineyard mystery series, The Champagne Conspiracy.

Welcome back to the Montgomery Estate Vineyard, where Lucie Montgomery and winemaker Quinn Santori have decided to bottle a sparkling champagne-like wine a week before Valentine’s Day. But on the eve of a major snowstorm, Quinn’s cousin Gino, patriarch of one of Napa’s wine family dynasties, turns up demanding help in solving a long-ago family mystery that has its origins in Prohibition-era Washington, D.C., where bootlegging and blackmail, jazz and murder, went hand in hand. Before long Lucie realizes someone will go to any lengths to keep a century-old secret involving a scandalous presidential affair buried in the past. Can she learn the identity of the ruthless modern-day blackmailer determined to stop her before it’s too late?

ELLEN CROSBY is the author of the Virginia-set Wine Country Mysteries series, which began with The Merlot Murders. She has also written a mystery series featuring international photojournalist Sophie Medina, and Moscow Nights, a standalone.

Previously she was a freelance reporter for The Washington Post, Moscow correspondent for ABC News Radio, and an economist at the U.S. Senate.

“Crosby has constructed a neat whodunit, supported by enough wine-making lore to give it some extra body.” —The New York Times on The Merlot Murders

“An addictive whodunit.” —Publishers Weekly on The Vintage Vendetta

“A beguiling combination of wine lore, history, and mystery.” —Kirkus Reviews on The Bordeaux Betrayal

“Light and refreshing—like a glass of white wine on a summer day… an engaging mystery with likeable characters. Crosby, a former journalist, has obviously done her homework about grape growing and winemaking.” —The Associated Press on The Chardonnay Charade

“Like a fine wine, Crosby’s debut is complex and intricate… This is a terrific kickoff to what promises to be a highly satisfying new series.” —Publishers Weekly on The Merlot Murders

“Crosby imbues her work with a killer plot (and surprising conclusion), agreeable characters, polished prose and colorful detail. . . . Blended, they provide a superior yield.” —The Richmond Times-Dispatch on The Sauvignon Secret

“The meticulously researched historical background—always a hallmark in Crosby’s novels—is nicely balanced by an intriguing mystery.” —Booklist on The Vintage Vendetta

“If wine be the nectar of the gods, Ellen Crosby’s series of wine-flavored mysteries is a heady quaff for us mere mortals… The Bordeaux Betrayal is a long swallow of pure delight.” —Easton (MD) Star-Democrat