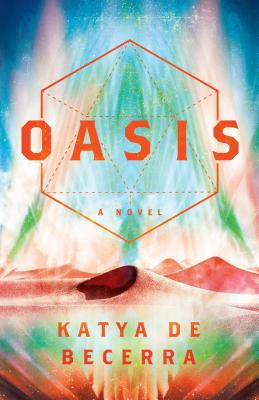 In this young adult thriller for fans of Lost and The Twilight Zone, a group of teens are saved when they come across a mysterious oasis. But who will save them from the oasis?

Alif had exciting summer plans: working on her father’s archeological dig site in the desert with four close friends ... and a very cute research assistant. Then the sandstorm hit.

Their camp wiped away, Alif and the others find themselves lost on the sands, seemingly doomed ... until they find the oasis. It has everything they need: food, water, and shade—and mysterious ruins that hide a deadly secret. As reality begins to shift around them, they question what’s real and what’s a mirage.

The answers turn Alif and her friends against each other, and they begin to wonder if they’ve truly been saved. And while it was easy to walk into the oasis, it may be impossible to leave ...

“Will stick to readers’ skin long after the final page is turned.” —Booklist (starred review)

“de Becerra successfully builds a fraught tension throughout the book that mirrors the characters’ feelings as reality leaves them behind . . . well worth the payoff.” —The Bulletin

Katya de Becerra was born in Russia, studied in California, lived in Peru, and then stayed in Australia long enough to become a local. She was going to be an Egyptologist when she grew up, but instead she earned a PhD in Anthropology. What The Woods Keep is her first novel.

“Readers will be engaged as Alif and the others encounter one crisis after another, and small details woven throughout the plot build to a surprise ending . . . An X-Files–worthy survival story.” —School Library Journal

“Tense, electric storytelling that makes you wonder what you would be willing to sacrifice to have your deepest longings fulfilled.” —Rachael Craw, award-winning author of The Rift

“de Becerra successfully builds a fraught tension throughout the book that mirrors the characters’ feelings as reality leaves them behind . . . well worth the payoff.” —The Bulletin

“If you’re someone who enjoys fantasy reads set in contemporary times with accurate referencing to science and technology with great suspense and mind boggling mystery, then this is the one for you!” —The Nerd Daily

“Magically eerie and creepy with a side of amazingly weird.” —Candace Robinson, author of Quinsey Wolfe’s Glass Vault and The Bride of Glass

PRAISE FOR KATYA DE BECERRA'S WHAT THE WOODS KEEP:

“Blending mythology and a contemporary story of family drama, de Becerra's debut novel is a narrative that will keep readers enthralled.” —Booklist

“Spooky atmospherics and moral ambiguity complement the blend of science and myth to create a thoughtful and compelling horror fantasy.” — Bulletin of the Center for Children's Books

“The characters in this debut novel are interesting and modern, particularly Hayden’s humorous, vibrant roommate... Adds a new angle to the “small town with a secret” genre.” —VOYA