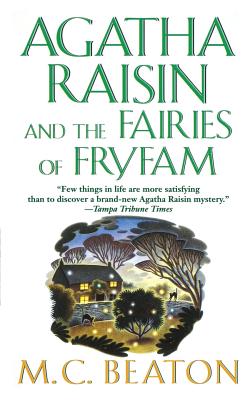 This is book number 10 in the Agatha Raisin Mysteries series.

When a fortune teller from a previous case informs Agatha Raisin that her destiny-and true love-lies in Norfolk, she promptly rents a cottage in the quaint village of Fryfam. No sooner does she arrive than strange things start happening. Random objects go missing from people's homes and odd little lights are seen dancing in the villagers' gardens and yards. Stories soon begin circulating about the presence of fairies.

But when a prominent village resident is found murdered, and some suspicion falls on her and her friend Sir Charles Fraith, Agatha decides she's had enough of this fairy nonsense and steps up her sleuthing for a human killer.

The prickly yet endearing Agatha will have fans dangling in suspense: Will she catch her crook-and a husband?

“AGATHA RAISIN AND THE FAIRIES OF FRYFAM is a witty tale that will keep you laughing and guessing at the same time.” —RT Book Reviews