Rebel Mechanics: All Is Fair in Love and Revolution (Paperback) 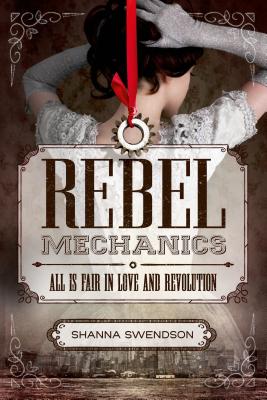 Rebel Mechanics: All Is Fair in Love and Revolution (Paperback)

What if British magic kept the American Revolution from ever occurring?

It's 1888, and seventeen-year-old Verity Newton lands a job in New York as a governess to a wealthy leading family—but she quickly learns that the family has big secrets. Magisters have always ruled the colonies, but now an underground society of mechanics and engineers are developing non-magical sources of power via steam engines that they hope will help them gain freedom from British rule. The family Verity works for is magister—but it seems like the children's young guardian uncle is sympathetic to the rebel cause. As Verity falls for a charming rebel inventor and agrees to become a spy, she also becomes more and more enmeshed in the magister family's life. She soon realizes she's uniquely positioned to advance the cause—but to do so, she'll have to reveal her own dangerous secret.

Rebel Mechanics: All Is Fair in Love and Revolution by Shanna Swendson is a fast-paced, romantic young adult novel full of intrigue and starring a strong, spunky heroine.

Shanna Swendson is the author of the popular adult romantic fantasy series, Enchanted, Inc. Rebel Mechanics is her first novel for young adults. She lives in Irving, Texas.

"It is 1888, and the Magisters, the magical British upper-class, rule the American colonies after their devastating victory in the American Revolution. The rebels now look elsewhere—to science and engineering—for the power to help them overthrow British rule. Seventeen-year-old Verity Newton comes to New York City looking for work and is quickly swept up in the revolutionary fervor of the young mechanics, engineers, and scientists who befriend her. . . . Recommend to fans of Gail Carriger's "The Finishing School" series. . . . a whole lot of fun." -School Library Journal