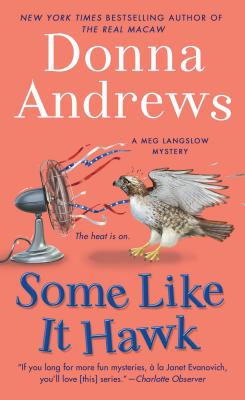 This is book number 14 in the Meg Langslow Mysteries series.

Meg Langslow is plying her blacksmith's trade at Caerphilly Days, a festival inspired by her town's sudden notoriety as "The Town That Mortgaged Its Jail." The lender has foreclosed on all Caerphilly's public buildings, and all employees have evacuated except for Phineas Throckmorton, the town clerk who barricaded himself in the courthouse basement.

Phinny's year-long siege of protest has been possible because of a tunnel through which his local supporters deliver food and supplies. But when a woman is found dead on the premises, Phinny becomes a person of interest. Meg is certain that Phinny's been framed by the hawkish lender. Now it's up to Meg and the rest of Caerphilly to protect Phinny—and his beloved pet pigeons. Meanwhile, the killer has flown the coop…

Donna Andrews is the author of the Meg Langslow mysteries, including Stork Raving Mad and Swan for the Money. She has won the Agatha, Anthony, and Barry awards, a Romantic Times award for best first novel, and four Lefty and two Toby Bromberg Awards for funniest mystery. When not writing fiction, Andrews is a self-confessed nerd, rarely found away from her computer, unless she's messing in the garden. She lives in Reston, Virginia.

“Andrews always leavens the mayhem with laughs.” —Richmond Times-Dispatch on Swan for the Money

“The Meg Langslow series just keeps getting better. Lots of cozy writers use punny titles, but Andrews backs them up with consistently hilarious story lines.” —Booklist on Swan for the Money

“Fans of comic cozies who have never read Andrews' Meg Langslow mysteries have a real treat in store.…Lots of silly but infectious humor and just enough mystery.” —Booklist on Six Geese A-Slaying