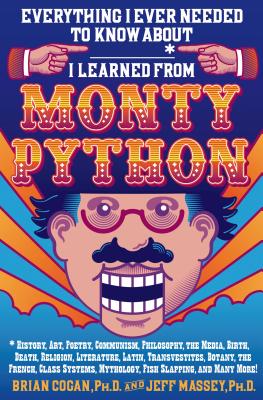 Throughout their five seasons on British television (and well into the troop's movie sequels and assorted solo projects), Monty Python became a worldwide symbol not only for taking serious subjects and making them silly, but also for treating silly subjects seriously.

Monty Python provided a treasure trove of erudite "in" jokes, offering sly allusions to subjects as diverse as T.S. Elliot's "Murder in the Cathedral" (as part of a commercial for a weight loss product) and how to conjugate Latin properly (as explained by a Roman centurion to a Jewish zealot painting anti-Roman graffiti on a wall). It was this combination of the uniquely highbrow but silly humor that inspired countless followers (Saturday Night Live, to name one). This hilarious and helpful guide puts Python's myriad references into context for the legion of fans, scholars, and pop culture aficionados that still strive to "get" Monty Python.

DR BRIAN COGAN is an Associate Professor and Chair of the Department of Communication Arts and Sciences at Molloy College in Long Island, New York.  He is the author, co-author and co-editor of numerous books, articles and anthologies on popular culture, music and the media.  His specific areas of research interest are punk rock, comic books, and the intersection of politics and popular culture.  He is the author of The Punk Rock Encyclopedia (Sterling 2008), co-author with Tony Kelso of The Encyclopedia of Popular Culture, Media and Politics (Greenwood Press 2009) as well as co-editor with Tony Kelso on Mosh the Polls: Youth Voters, Popular Culture, and Democratic Engagement (Lexington 2008), which is about youth culture and political involvement.  Dr. Cogan is also the co-author, along with William Phillips, of the Encyclopedia of Heavy Metal Music and Culture (Greenwood Press 2009).  He is also on the editorial board of the Journal of Popular Culture and on the editorial board of ABC-Clio’s Popular Culture project. He has also written about these topics for publications such as the New York Post, Chunklet, Go Metric, Punknews.org and Muze.com. He has co-edited a two-volume book on the Baby Boomer generation for ABC-Clio.

DR JEFF MASSEY is an associate Professor in the Royal English Department at Molloy College in Long Island, New York. He is the co-editor (with Larissa Tracy of Longwood University) of the forthcoming collection Heads Will Roll!, which analyzes the importance of fictional beheadings throughout European history (Brill). He is also the author of various academic and pedagogical articles, on topics ranging from gendered social readings of Geoffrey Chaucer’s Troilus and Criseyde to mimetic love triangles in Thomas Hardy’s The Return of the Native, as well as strategies for teaching Beowulf, Arthuriana, and comic books in the classroom.  Dr. Massey holds advanced degrees in both medieval and classical literatures, espousing particular interest in mythology and monstrosity (werewolves are his specialty) as evidence of “ancient” popular culture.  He is the vice president of MEARCSTAPA, the international association for the study of medieval monstrosity, and sits on the editorial board of Energia, a journal devoted to applied social philosophy.  He currently teaches courses in monstrosity, mythology, linguistics, medievalia, and fantasy literature, including the works of JRR Tolkien and Terry Pratchett.  He has recently learned the first lesson in “not being seen.”

“The authors clearly know their Python, and they also know how much the Pythons themselves knew about virtually everything, up to and including the Spanish Inquisition.” —The New York Times

“The authors get the jokes as well as the anger behind many of them...With helpful books like this one, readers may be more alert to the persistent absurdities of modern life and to the bracing anarchy preached by Monty Python.” —The Washington Post

“Excellent...The focus on the important bits, the ones that really break the wall down, is where this work really shines.” —San Francisco Book Review

“A clever concept…[and] an interesting take on the Pythons.” —Kirkus Reviews

“Here devoted Python fans Cogan and Massey suggest that what made the show unique was its many in-jokes and references to history, philosophy, politics, pop culture, the arts, the sciences, and . . . well, pretty much everything[...]Their argument is undeniably persuasive: as anyone who's spent the best years of his or her life becoming a word-perfect reciter of Python sketches will tell you, there's a lot to be learned, if you just pay attention.” —Booklist

“Monty Python fans will applaud the efforts of fellow fans Cogan and Massey who introduce the surreal comedy group to the uninitiated by exploring the historical, political, literary, artistic, and even religious contexts for many of the troupe's sketches.” —Publishers Weekly

“As a lifelong Python fanatic, I've read just about everything ever written about them. How refreshing to see a new take on the phenomenon –the educational value of Monty Python! Everything I Needed to Know About __I learned from Monty Python proves something that I always suspected –Monty Python is good for you. Well written, thoroughly researched and often very funny, I couldn't put this book down. (Note to authors: please make the paperback version less sticky)” —Jason Lamb. cohost The Morning Zone, The Zone 91-3, Victoria, BC, Canada