The Nature of Order, Book Two: The Process of Creating Life: An Essay on the Art of Building and The Nature of the Universe (Hardcover) 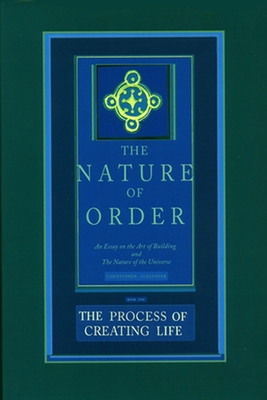 The Nature of Order, Book Two: The Process of Creating Life: An Essay on the Art of Building and The Nature of the Universe (Hardcover)

This is book number 2 in the Nature of Order series.

Christopher Alexander's series of ground-breaking books including A Pattern Language and The Timeless Way of Building have pointed to fundamental truths of the way we build, revealing what gives life and beauty and true functionality to our buildings and towns. Now, in The Nature of Order, Alexander explores the properties of life itself, highlighting a set of well-defined structures present in all order and in all life from micro-organisms and mountain ranges to good houses and vibrant communities.

Scientifically, The Process of Creating Life is perhaps the most exciting of the four books. How do beautiful creations come into being? Nature can make an infinite number of human faces, each one unique, each one beautiful. The same is true for daffodils, streams, and stars. But man-made creations especially the towns and buildings of the 20th century have only occasionally been really good, more often mediocre, and in the last 50 years have most often been deadly. What is the reason for the difference? It hinges on the deep nature of the processes we use. Merely understanding the geometry of beautiful and living form (the topic of Book 1) is not enough to help us create such a living geometry.

In the 20th century our society was locked into deadly processes which created our current built environment, process that most people were not really aware of and did not question. Despite their best efforts and intentions, architects and planners working within these processes could not achieve a living built environment. Life and beauty in the built world arise only from processes which allow living structure to unfold. The secret lies in knowing, as nature does, what must happen in what order: what sequence of events allows a living form to unfold successfully?

Here, in Book 2, Alexander puts forward a fully developed theory of living process. He defines conditions for a process to be living: that is, capable of generating living structure. He shows how such processes work, and how they may be created. At the core of the new theory is the theory of structure-preserving transformations. This concept, new in scientific thinking, is based on the concept of wholeness defined in Book 1: A structure-preserving transformation is one which preserves, extends, and enhances the wholeness of a system.

Structure-preserving transformations provide the means for any step-by-step process social, biological, architectural, or technical to reach configurations which are most profound, most capable of supporting life. The process of creation whether in the formation of a single object, or in the piece-meal aggregation of a town requires this sort of generative process, a careful and deliberate sequence of steps in which each step creates the context for the next one, and each next wholeness is derived from the previous wholeness. Our billions of beautiful and unique human faces come from one class of sequences.

Driven by these sequences, an initial cell differentiates again and again until beautiful and complex human beings emerge, infinitely various, always harmonious. Making changes in society, so that streets, buildings, rooms, gardens, and towns may be generated by hundreds of such sequences requires massive transformations. This book is the first blueprint of those transformations.

Taken as a whole, the four books create a sweeping new conception of the nature of things which is both objective and structural (hence part of science) and also personal (in that it shows how and why things have the power to touch the human heart). A step has been taken, through which these two domains the domain of geometrical structure and the feeling it creates kept separate during four centuries of scientific though from 1600 to 2000, have finally been united.

The Nature of Order constitutes the backbone of Building Beauty: Ecologic Design Construction Process, an initiative aimed at radically reforming architecture education, with the emphasis of making as a way to access a transformative vision of the world. The 15 fundamental properties of life guide our work and have given us much more than a set of solutions. The Nature of Order has given us the framework in which we can search and build up our own solutions.

In order to be authentically sustainable, buildings and places have to be cared for and loved over generations. Beautiful buildings and places are more likely to be loved, and they become more beautiful, and loved, through the attention given to them over time. Beauty is therefore, not a luxury, or an option, it includes and transcends technological innovation, and is a necessary requirement for a truly sustainable culture.
Christopher Alexander is a builder, craftsman, general contractor, architect, painter, and teacher. He taught from 1963 to 2002 as Professor of Architecture at the University of California, Berkeley, and is now Professor Emeritus. He has spent his life running construction projects, experimenting with new building methods and materials, and crafting carefully articulated buildings- all to advance the idea that people can build environments in which they will thrive. Acting on his deeply held conviction that, as a society, we must recover the means by which we can build and maintain healthy living environments, he has lived and worked in many cultures, and built buildings all over the world. Making neighborhoods, building-complexes, buildings, balustrades, columns, ceilings, windows, tiles, ornaments, models and mockups, paintings, furniture, castings and carvings- all this has been his passion, and is the cornerstone from which his paradigm-changing principles have been derived. Professor Alexander is a fellow of the American Academy of Arts and Sciences. He received his doctorate in Architecture from Harvard University after completing degrees at Cambridge University in mathematics and architecture. He is the winner of the first medal for research awarded by the American Institute of Architects, a member of the Swedish Royal Academy, recipient of the Distinguished Professor Award from the American Association of Collegiate Schools of Architecture, and the recipient of the Vincent Scully Prize awarded by the National Building Museum in the US, among many other prestigious awards throughout his career. Christopher Alexander writes ""I believe we are on the threshold of a new era when the proper understanding of the deep questions of space, as they are embodied in architecture will play a revolutionary role in the way we see the world and will do for the world view of the 21st and 22nd centuries, what physics did for the 19th and 20th.
...Alexander's approach presents a fundamental challenge to us and our style-obsessed age. It suggests that beautiful form can come about only through a process that is meaningful to people...""- Thomas Fisher, Former Editor, Progressive Architecture;

""Alexander's genetic scripts are likely to... play a role so fundamental in the future,that their widespread use cannot even be imagined today. This will change the world as effectively as the advent of printing changed the world.""- Doug Carlston, Co-founder, Broderbund Software, Founder & CEO, icPlanet.com;

""...I can think of no one, certainly no one in the last thirty or so years, who has produced a deeper, more profoundly meaningful, visionary and lasting body of work that both unifies and transcends science and spirituality, than Christopher Alexander.""- Andy Ilachinsky, Theoretical Physicist;

""Five hundred years is a long time, and I don't expect that many of the people I interview will be known in the year 2500. Alexander may be an exception.""- David Creelman, Author, Interviewer, and Editor, HR Magazine""...I believe Alexander is likely to be remembered most of all, in the end, for having produced the first credible proof of the existence of God...""- Eric Buck, Department of Philosophy, University of Kentucky - -