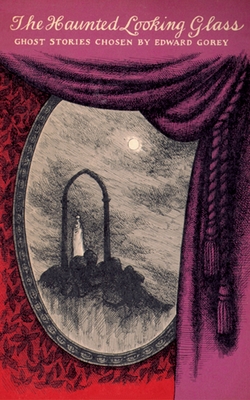 
BACKORDERED
The Haunted Looking Glass is the late Edward Gorey's selection of his favorite tales of ghosts, ghouls, and grisly goings-on. It includes stories by Charles Dickens, Wilkie Collins, M. R. James, W. W. Jacobs, and L. P. Hartley, among other masters of the fine art of making the flesh creep, all accompanied by Gorey's inimitable illustrations.

ALGERNON BLACKWOOD, "The Empty House"
W.F. HARVEY, "August Heat"
CHARLES DICKENS, "The Signalman"
L.P. HARTLEY, "A Visitor from Down Under"
R.H. MALDEN, "The Thirteenth Tree"
ROBERT LOUIS STEVENSON, "The Body-Snatcher"
E. NESBIT, "Man-Size in Marble"
BRAM STOKER, "The Judge's House"
TOM HOOD, "The Shadow of a Shade"
W.W. JACOBS, "The Monkey's Paw,"
WILKIE COLLINS, "The Dream Woman"
M.R. JAMES, "Casting the Runes"
Edward Gorey (1925–2000) was born in Chicago. He studied briefly at the Art Institute of Chicago, spent three years in the army testing poison gas, and attended Harvard College, where he majored in French literature and roomed with the poet Frank O’Hara. In 1953 Gorey published The Unstrung Harp, the first of his many extraordinary books, which include The Curious Sofa, The Haunted Tea Cosy, and The Epiplectic Bicycle. In addition to illustrating his own books, Gorey provided drawings to countless books for both children and adults.

In addition to illustrating his own books, Edward Gorey provided drawings to countless books for both children and adults. Of these, New York Review Books has published The Haunted Looking Glass, a collection of Gothic tales that he selected and illustrated; The War of the Worlds by H. G. Wells; Men and Gods, a retelling of ancient Greek myths by Rex Warner; in collaboration with Rhoda Levine, Three Ladies Beside the Sea and He Was There from the Day We Moved In; and The Unrest-Cure and Other Stories, a collection of tales by Saki.
"A brilliant draftsman, Mr. Gorey has raised the crosshatch, a timeworn 19th century mannerism, into a timeless visual language….[His works] tickle the funny bone as they raise hair on the back of the neck." —The New York Times