A Voice for Equity (Paperback) 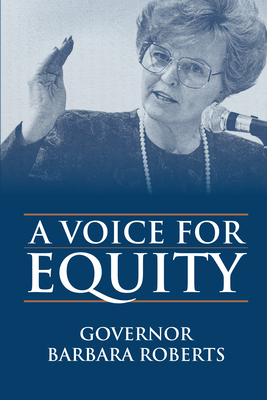 A Voice for Equity (Paperback)


Available from Our Distributor (Not in Store)
Governor Barbara Roberts has been advocating for equity since the first time she spoke up for her autistic son's educational rights while attending a local school board meeting, This began her career as a public speaker, leading to her political work for more than fifty years. Over the years she has been speaking out as a strong advocate for numerous causes; disability rights, women's rights, LGBTQ rights, environmental concerns, death with dignity rights, equality and respect for all, and more.

Today at 85 years old, Roberts continues to speak publicly, passionately, a voice for equity, whether at keynote speeches, commencement addresses, political rallies and cendorsements for candidates and issues, leadership conferences, Ted X presentations, or any other gathering rallying for fairness and insight.

A Voice for Equity is a collection of twenty-two of Roberts's compelling speeches that span her years as a public servant, including her term as the 34th Governor of Oregon. The topics of her speeches include disability rights, women's rights, voting rights, LGBTQ rights, children's rights, death education and grieving, the spotted owl and Oregon's forest plan, protection of public lands, and more.

Equity is Governor Barbara Roberts's life passion. She continues to be inspired to speak up and give a voice to fairness, equality, a level playing field, decency, and dignity. As she states so passionately in her author's reflections: "I hope my passion comes through to you, the reader. Please sense my urgency of message. Be open to making change. Be the voice.--Barbara Roberts "NewSage Press.

Foreword by Barbara K. RobertsI have been writing and delivering speechesand public presentations for decades. Early on, the speeches filled my need tovoice my feelings on causes that mattered to me--children with disabilities, women's rights, environmental concerns. As time passed, I became activelyinvolved in the political arena and my commitment to change expanded to outspokenpresentations of advocacy, whether it was to support a particular candidate'scampaign, my active support for gay rights, speaking for leadership with courage, or my work for Death with Dignity. In 2002, I wrote a bookon death and the importance of grieving, Death Without Denial, Grief Without Apology. My second book was my autobiography, Up the Capitol Steps, published in 2011. This was followed by a second editionof Death Without Denial in 2016, which specifically updated theprogress made nationally for assisted dying. My bookshave expanded my speaking opportunities and audiences, reaching people far beyond the political arena. The invitations to speakpublicly have continued to flow over the years--from book readings, to keynotespeeches at conferences and commencement addresses, to panels on women's leadership. I have given Rotary and Kiwanis luncheonaddresses, and lectures in classrooms from Harvard to theUniversity of Oregon. And just when I began tothink I had said it all, I recognized a pattern, perhaps even a "life focus" thathad emerged. The passion that continues to move me is giving voice to--andadvocating for--fairness, equality, a level playing field, decency, and dignity.My passion had a place and I realized that my voice mattered. With this book, I havegathered a compilation of my messages of advocacy on a range of subjects. Spacelimitations necessitated careful editing, but I have worked to remain true tothe messages as delivered over this thirty-three-year period. In my 85th year, I still feel great passion for the topics I have championed in so many of myspeeches. I hope my passion comesthrough, dear reader. Please, sense my urgency of message. Be open to making change. BE THE VOICE.