Death in the Air: The Boy Sherlock Holmes, His Second Case (Paperback) 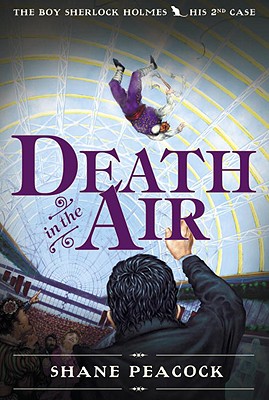 Death in the Air: The Boy Sherlock Holmes, His Second Case (Paperback)

This is book number 2 in the The Boy Sherlock Holmes series.

After the harrowing experience of losing his mother while solving a brutal murder in London’s East End, young Sherlock Holmes commits himself to fighting crime … and is soon involved in another case. While visiting his father at the magnificent Crystal Palace, Sherlock stops to watch a remarkable and dangerous trapeze performance high above, framed by the stunning glass ceiling of the legendary building. Suddenly, the troupe’s star is dropping, screaming and flailing, toward the floor. He lands with a sickening thud just a few feet away, and rolls up almost onto the boy’s boots. Unconscious and bleeding profusely, his body is grotesquely twisted. In the mayhem that follows, Sherlock notices something that no one else sees — something is amiss with the trapeze bar! He knows that foul play is afoot. What he doesn’t know is that his discovery will put him on a frightening, twisted trail that leads to an entire gang of notorious criminals. Wrapped in the fascinating world of Victorian entertainment, its dangerous performances, and London’s dark underworld, Death in the Air raises The Boy Sherlock Holmes to a whole new level.

Be sure not to miss Eye of the Crow, The Boy Sherlock Holmes, His First Case.
Shane Peacock was born in Thunder Bay, Ontario, one of four brothers. He attended school in the northern town of Kapuskasing, before studying history and English literature at university. A biographer, journalist, and screenwriter, he is also the author of six novels and three plays, and he has been nominated for numerous awards including several National Magazine Awards and the Arthur Ellis Award for crime fiction. When not writing, Shane Peacock enjoys playing hockey and making up characters that chase his three children around the house. Death in the Air is the second book in his popular The Boy Sherlock Holmes series. Eye of the Crow, also published by Tundra Books, was the first. Shane Peacock lives near Cobourg, Ontario.
Praise for Death in the Air:
“Peacock continues his literary derring-do in the second Sherlock Holmes novel, Death in the Air, as suspenseful and riveting as the first book….The crafty turns and twists of this mystery adventure only intensify from the sensational opening, so that you can’t turn the pages fast enough….Peacock’s writing, smart, lithe, and assured, is perfectly attuned to readers in its accessibility and appeal…” —The Ottawa Citizen