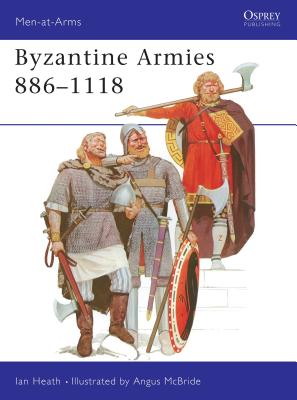 This is book number 89 in the Men-at-Arms series.

The Byzantines had a remarkably sophisticated approach to politics and military strategy. Unlike most of their contemporaries, they learnt very early in their history that winning a battle did not necessarily win a war, and they frequently bought off their enemies with treaties and bribes rather than squander men and matériel in potentially fruitless campaigns. The Byzantine army of the 10th and early 11th centuries, at the height of its power and efficiency, was the best-organised, best-trained, best-equipped and highest-paid in the known world. This splendid book by Ian Heath examines the Byzantine Armies from 886-1118, including the lusty, hard-fighting, hard-drinking 'barbarian' Varangian guard.
Ian Heath is a highly respected author, and has written a number of Osprey titles, among them MAA 275 The Taiping Rebellion 1851-66. He is also currently working on a five-volume project covering the armies of 19th-century Asia. Ian lives and works in Cambridgeshire, UK.