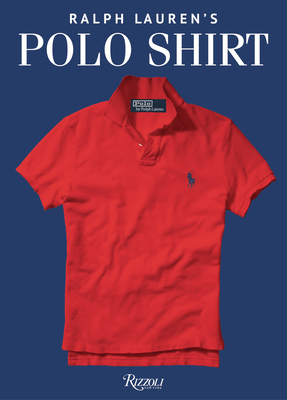 By Ralph Lauren (Introduction by), Ken Burns (Foreword by), David Lauren (Afterword by)


BACKORDERED
Embodying a chic casualness that is uniquely American, the Polo shirt is a cultural symbol, worn by everyone from movie stars and presidents to athletes and artists.

The Polo shirt is to Ralph Lauren what Mickey Mouse is to Disney or the Empire State Building is to New York City. Whether worn with the collar popped up, open and untucked, or dressed up under a suit jacket, the Polo embodies the optimism of American style. In Lauren’s words, “It’s honest and from the heart and hopefully that is what touches the diversity of all who wear it. It was never about a shirt, but a way of living.

”Featuring a gallery of stars from the worlds of sports, politics, film, and music—from Leonardo DiCaprio and Spike Lee, to Bill Clinton and Oprah Winfrey, to Pharrell Williams and Venus Williams—as well as everyday people who make the Polo their canvas for self-expression, The Polo Shirt looks at the enduring cool of a wardrobe classic.

Included are the full range of colors, styles, and fits the shirt has been produced in during its more than 50 year history. From the classic white to the weathered Polo, from the striped Polo to the US Olympic, US Open, and Wimbledon Championship collaborations, this catalogue celebrates the full spectrum of the Polo, making it a collector’s dream.
Ralph Lauren began his career in 1967, designing neckties under the label Polo. He has received numerous awards for his work in fashion, philanthropy, and human-itarian causes and is the only designer to receive the CFDA’s four highest honors: Womenswear Designer of the Year; Menswear Designer of the Year; Retailer of the Year; and Lifetime Achievement. In 2019 he received an honorary KBE for Services to Fashion from the Prince of Wales. Ken Burns is an Academy Award–winning film-maker. David Lauren is the Chief Innovation Officer of Ralph Lauren, Vice Chairman of the Board, and President of the Ralph Lauren Foundation.
"This 544-page tome recounts the historyand evolution of this classic shirt as well as the very lifestyle that it embodies. Gorgeousimages, along with fascinating stories by celebrities and non-celebrities alike, illustrate this must-read for the Polo lover." —SOCIETY TEXAS

"With nearly 50 years of history behind it, the Polo has been produced in numerous variations, all of which are faithfully documented in the book. From the classic white version to the striped iteration worn by team USA at the Olympics, they all have a story that reflects Polo Ralph Lauren’s many facets." —ROBB REPORT