All They Will Call You (Camino del Sol ) (Paperback) 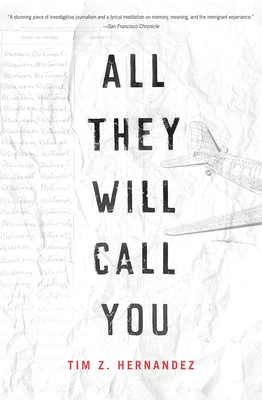 All They Will Call You is the harrowing account of “the worst airplane disaster in California’s history,” which claimed the lives of thirty-two passengers, including twenty-eight Mexican citizens—farmworkers who were being deported by the U.S. government. Outraged that media reports omitted only the names of the Mexican passengers, American folk icon Woody Guthrie penned a poem that went on to become one of the most important protest songs of the twentieth century, “Plane Wreck at Los Gatos (Deportee).” It was an attempt to restore the dignity of the anonymous lives whose unidentified remains were buried in an unmarked mass grave in California’s Central Valley. For nearly seven decades, the song’s message would be carried on by the greatest artists of our time, including Pete Seeger, Dolly Parton, Bruce Springsteen, Bob Dylan, and Joan Baez, yet the question posed in Guthrie’s lyrics, “Who are these friends all scattered like dry leaves?” would remain unanswered—until now.

Combining years of painstaking investigative research and masterful storytelling, award-winning author Tim Z. Hernandez weaves a captivating narrative from testimony, historical records, and eyewitness accounts, reconstructing the incident and the lives behind the legendary song. This singularly original account pushes narrative boundaries, while challenging perceptions of what it means to be an immigrant in America, but more importantly, it renders intimate portraits of the individual souls who, despite social status, race, or nationality, shared a common fate one frigid morning in January 1948.

Tim Z. Hernandez was born and raised in California’s San Joaquin Valley. An award-winning poet, novelist, and performer, he is the recipient of the American Book Award for poetry, the Colorado Book Award for poetry, the Premio Aztlán Literary Prize for fiction, and the International Latino Book Award for historical fiction. His books and research have been featured in the Los Angeles Times, the New York Times, CNN, Public Radio International, and National Public Radio. Hernandez holds a BA from Naropa University and an MFA from Bennington College. He continues to perform and speak across the United States and internationally, but he divides his time between Fresno and El Paso, where he is an assistant professor in the MFA Program in Creative Writing at the University of Texas at El Paso. You can find more information at his website, www.timzhernandez.com.

“A stunning piece of investigative journalism and a lyrical meditation on memory, meaning, and the immigrant experience.”—San Francisco Chronicle

“With compassionate storytelling, Hernandez humanizes the individuals who died in the crash, eulogizing them with anecdotes and stories that would have been theirs if they had not lost their lives so far from home.”—Los Angeles Review of Books

“The book is more than just a biography of names. It’s a history of the Mexican American experience. It’s about how a former worker-immigrant program worked. It’s about the lives of those who came to America.”—Tulsa World

“[All They Will Call You] toes the line between journalism, memoir, ethnography, and poetry with a rare and invigorating finesse, emerging as a rare piece of art.”—Visalia Times-Delta

“Tim Z. Hernandez is the real thing. This epic, tragic story is finally being told, and it is in the best possible hands.”—Luis Alberto Urrea
“An important and moving book, exploring the theme of identity and loss and disenfranchisement—topics that have never been more urgent than they are now. Hernandez has illuminated the present with this original and riveting examination of the past.”—Susan Orlean

“There’s something miraculous about the storytelling feat Tim Z. Hernandez has pulled off in All They Will Call You. With great compassion and patience, he has immersed himself in a long-forgotten episode of California history, and uncovered a multilayered epic of love, injustice, and family fortitude, stretching across generations and borders. This is an intelligent, empathic, and deeply moving work.”—Héctor Tobar

“In his lyrics to ‘Plane Wreck at Los Gatos,’ my father, Woody Guthrie, asked a simple question, ‘Who are these friends?’ and finally someone has answered that question. It was unknown if their stories would ever come to light, or if they would simply remain ghosts without names, as if they had no lives at all—as if they didn’t count. Through Hernandez’s amazing work, I now know who these people were, their lives, their loves, and their journeys. All They Will Call You is a heart-wrenching read for anyone who cares, and the names—now etched in stone in a far-off graveyard—have become friends who will travel with me as long as I am walking.”—Arlo Guthrie

“All They Will Call You is a humbling book that honors and memorializes these ‘deportees’ and all the humble people whose backbreaking work puts food on our tables.”—De Colores

“The hybrid style that Hernandez works with creates space so that, as readers, we may find those moments of resonance that turn anonymous migrant workers into someone a reader could have known. By doing so, we find a space to grieve a loss that we weren’t even aware of until we picked up the book.”—Signature

“Told with a reporter’s eye and a poet’s voice, All They Will Call You is a great historical piece of work, completing the mission that Woody Guthrie embarked on when he wrote his classic song long ago.”—David Amram, author of Offbeat: Collaborating with Kerouac

“Hernandez’s loving detail and authentic knowledge of the Valley continue to plant him firmly in Steinbeck and Saroyan country while forging his own path. Part documentary, part thriller, Hernandez’s work rings true—nearly breathless with new information and a certain justice now rising like smoke from the wreckage in the canyons of his beloved and mysterious San Joaquin.”—Richard Montoya, Filmmaker and Playwright

“A scrupulous writer and researcher, Hernandez has changed the course of America’s musical history, as well as its immigration history.”—Will Kaufman, author of Woody Guthrie, American Radical

“This story holds great historical significance as we continue to define ourselves as a nation. . . . Woody would be proud to know that his song played a part as a catalyst for this book, offering overdue closure to the lives of these workers.”—Deana McCloud, Executive Director of the Woody Guthrie Center

“Woody Guthrie must surely be smiling, wherever he is. All They Will Call You completes the sad yet compelling story outlined many years ago in his song ‘Plane Wreck at Los Gatos (Deportee).’ Thanks to Tim Hernandez, the souls of the migrant workers lost in that 1948 plane wreck can now rest peacefully. Required reading for true Guthrie fans.”—Robert Santelli, Executive Director of the GRAMMY Museum