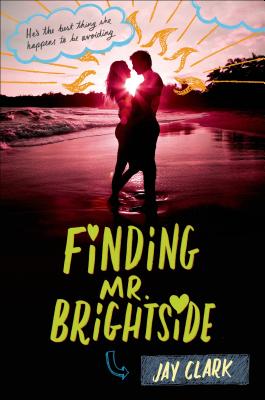 Abram and Juliette know each other. They've lived down the street from each other their whole lives. But they don't really know each other—at least, not until Juliette's mom and Abram's dad have a torrid affair that culminates in a deadly car crash. Sharing the same subdivision is uncomfortable, to say the least. They don't speak.

Fast-forward to the neighborhood pharmacy, a year later. Abram decides to say hello. Then he decides to invite Juliette to Taco Bell.

To her surprise as well as his, she agrees. And the real love story begins.

Jay Clark has written essays and articles for The Washington Post and Tennis magazine. A former resident of Ohio, he now lives in Virginia. The Edumacation of Jay Baker is his debut young adult novel.

“I have rarely rooted for anyone--fictional or real--more than I rooted for Abram and Juliette. Jay Clark--you just wrote one of my favorite YA books ever. Thank you!” —Jerry Spinelli, author of Stargirl

“High school seniors and neighbors Abram Morgan and Juliette Flynn have each been hiding in their own ways since his father and her mother died in a car accident while having a secret affair. Abram takes too much Paxil, which has caused him to be lethargic, drop tennis, overeat, and avoid thinking about college. Juliette is hooked on Adderall, runs compulsively, and barely eats. One night in a CVS, they stop avoiding one another and are surprised by their easy chemistry. Bonding over late-night TV marathons and Taco Bell runs, they take a trip to Abram's beach house, but their insecurities and disappointment in their parents (including the ones who are still alive) keep their romance slow-burning. Clark (The Edumacation of Jay Baker) crafts a believably tentative relationship between these two damaged teens, their sharp-edged humor masking the pain that they can't quite shake. Supporting characters don't make much of a showing or impact-Baker keeps the focus on Abram and Juliette as they prove to be just what the other needed.” —Publishers Weekly

“A love story that begins at a pharmacy and then moves to a Taco Bell before settling into a beachfront vacation condo? Sounds implausible, but no more so than the romance that develops between Abram and Juliette. Abram's father and Juliette's mother were having an affair before the accident that took their lives. Now the two teens are inexplicably drawn to each other. Clark makes this thorny story work by creating dynamic and complex teens who help each other face their demons. Those demons include prescription drug abuse-Abram with antidepressants, and Juliette in regards to ADHD medication she does not really need. Though the problems the teens face are myriad, the story never bogs down. Instead, the uncomfortable silences, the awkward conversations, and the slow but gradual trust that connects both the teens and their surviving parents ground the novel in the stark reality that sometimes life is full of genuine surprises.” —Booklist

“Abram and Juliette live just down the street from each other. A year ago, a car accident rocked their lives, as it killed Abram's father and Juliette's mother-and revealed their affair. Since then, Abram has been watching over Juliette, spurred by his remarkably generous and well-adjusted mother to make sure she is doing okay. She's not: she has begun to abuse the Adderall her high-powered mother had her try. It's tough when your mom introduces you to her drug of choice, but even tougher to deal with that along with betrayal and grief. Against all of her willpower, anger, and better judgment, Juliette is drawn toward Abram, whose quiet persis- tence turns out to be just what she needs to find a path forward. This is romance done right, with a slow bloom that fights its way through legitimate resistance with patience and forgiveness toward resilience. Readers get a balanced look at what's happening through chapters that alternate viewpoint between the protagonists, so that they understand that both Abram and Juliette bring not only their need but also a different kind of help into the relationship. Juliette is committed to getting Abram off Paxil and back to the tennis courts he left behind when his father died, and Abram provides a consistent, often silent presence that allows Juliette to learn to trust herself at her own pace. Their respect for each other's pain and their personality differences-her constant self-doubting critique and his old-style loyalty, good humor, and gentleness-make them safe complements. Readers who want some old-fashioned sweetness in the midst of a smart, contemporary romance will find it here.” —BCCB

“* The magic lies in the telling . . . a narrative patter so deeply laced with groaner puns, pop-culture bombs, and warp-speed free associations that it's almost a new language. . . . Most of all, though, Jay's smarts, originality, and warmth make the old teen trope of the hot girl(s) falling for the doofus guy actually believable.” —Booklist, starred review on The Edumacation of Jay Baker

“Readers eager to give both their hearts and their brains an energetic workout will enjoy this mash-up of rockin' comedy and problem novel.” —BCCB on The Edumacation of Jay Baker