The Price of Freedom: How One Town Stood Up to Slavery (Hardcover) 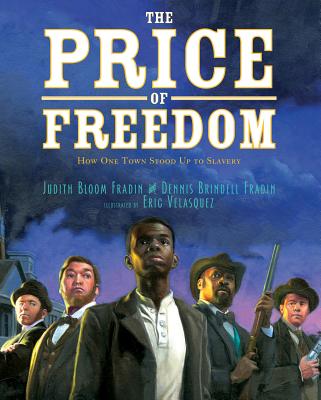 By Dennis Brindell Fradin, Judith Bloom Fradin, Eric Velasquez (Illustrator)
This book is currently not available
Hard to Find - Unlikely to be Available

When John Price took a chance at freedom by crossing the frozen Ohio river from Kentucky into Ohio one January night in 1856, the Fugitive Slave Act of 1850 was fully enforced in every state of the union. But the townspeople of Oberlin, Ohio, believed there that all people deserved to be free, so Price started a new life in town-until a crew of slave-catchers arrived and apprehended him. When the residents of Oberlin heard of his capture, many of them banded together to demand his release in a dramatic showdown that risked their own freedom. Paired for the first time, highly acclaimed authors Dennis & Judith Fradin and Pura Belpre award-winning illustrator Eric Velasquez, provide readers with an inspiring tale of how one man's journey to freedom helped spark an abolitionist movement.

DENNIS and JUDITH BLOOM FRADIN have published more than 150 books for children. They have won many awards, including the 2004 SCBWI Golden Kite Honor book award for The Power of One: Daisy Bates and the Little Rock Nine. Their most recent National Geographic title 5,000 Miles to Freedom: Ellen and William Craft's Flight from Slavery was named one of Chicago Public Library's Best Books of the Year, a Notable Social Studies Trade Book for Young People, a School Library Journal Best Book of the Year, and received a Blue Ribbon from the Bulletin of the Center for Children's Books. Dennis is also the author of Duel, Let it Begin Here and The Signers: The 56 Stories Behind the Declaration of Independence, which won numerous awards, including an ALA Notable, an ABC Choice Award, and an IRA Teacher's Choice Award. ERIC VELASQUEZ is the author and illustrator of Grandma's Records and Grandma's Gift, a Pura Belpre Award winner. He is also the illustrator of Houdini and The Piano Man, for which he won the Coretta Scott King/John Steptoe New Talent Award. His most recent collaborations with Carole Boston Weatherford include I, Matthew Henson, which received four starred reviews, and Jesse Owens: Fastest Man Alive, which received two starred reviews. www.ericvelasquez.com