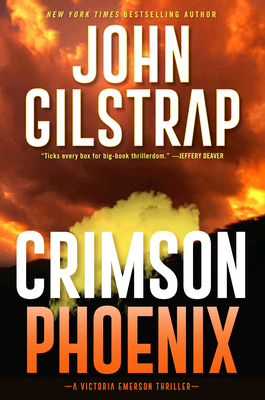 This is book number 1 in the A Victoria Emerson Thriller series.

The nightmare scenario has come to pass. America has fallen. In the aftermath, one woman becomes the last hope of a nation and its people in New York Times bestselling author John Gilstrap’s electrifying new Victoria Emerson thriller series.

West Virginia Congresswoman Victoria Emerson has always put the needs of her community before the power games of Washington, D.C. Then an Army officer appears on her doorstep, deploying the code words “Crimson Phoenix”—meaning this is not a drill. The United States is on the brink of nuclear disaster. The major will escort her to a secure bunker. She cannot bring her family.

A single mother, Victoria refuses to abandon her teenage sons. Denied entry to the bunker, the family somehow survives the unthinkable. In the aftermath, the nation is in chaos. The grid is gone. Food is scarce. Civility gives way to desperate survival. Against this total collapse, Victoria creates a new home in a small Appalachian mountain town. The community she builds around her shines like a beacon in a dark wasteland. Now she must defend it with her life—to give hope to a new America

John Gilstrap is the New York Times bestselling author of the Jonathan Grave thriller series and other fiction and nonfiction. His novel Against All Enemies won the award for best paperback original of 2015 given by the International Thriller Writers. His books have been translated into more than twenty languages. An explosives safety expert and former firefighter, he holds a master’s degree from the University of Southern California and a bachelor’s degree from the College of William and Mary in Virginia. He lives in Fairfax, Virginia. Please visit him on Facebook or at www.johngilstrap.com.