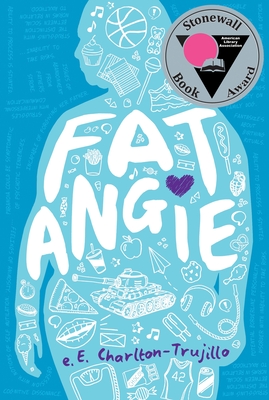 
Email for availability
Winner of a 2014 Stonewall Book Award

Her sister was captured in Iraq, she’s the resident laughingstock at school, and her therapist tells her to count instead of eat. Can a daring new girl in her life really change anything?

Angie is broken — by her can’t-be-bothered mother, by her high-school tormenters, and by being the only one who thinks her varsity-athlete-turned-war-hero sister is still alive. Hiding under a mountain of junk food hasn’t kept the pain (or the shouts of “crazy mad cow!”) away. Having failed to kill herself — in front of a gym full of kids — she’s back at high school just trying to make it through each day. That is, until the arrival of KC Romance, the kind of girl who doesn’t exist in Dryfalls, Ohio. A girl who is one hundred and ninety-nine percent wow! A girl who never sees her as Fat Angie, and who knows too well that the package doesn’t always match what’s inside. With an offbeat sensibility, mean girls to rival a horror classic, and characters both outrageous and touching, this darkly comic anti-romantic romance will appeal to anyone who likes entertaining and meaningful fiction.
e. E. Charlton-Trujillo is an award-winning filmmaker and YA novelist. They live in Cincinnati, Ohio.
Charlton-Trujillo offers a hard-hitting third novel that swings between incredibly painful low moments and hard-won victories.
—Publishers Weekly (starred review)

The voice of a dry and direct third-person narrator works in a story laden with heavy topics, including war, death, suicide, cutting, bullying, and homosexuality.
—School Library Journal (starred review)

Entrancingly eccentric prose, a protagonist “jam-packed with awkward” and a military sister missing in action coalesce into a memorable romance that’s rockier than might be expected—and more realistic.
—Kirkus Reviews

Angie’s gradual grieving process, which takes her through crushing embarrassment as well as bittersweet triumph, will move readers as it takes up multiple contemporary issues and processes them with both credibility and considerable rhetorical finesse.
—Bulletin of the Center for Children's Books

Angie epitomizes the hidden anger and self-abusive mentality of the traumatized victim. While she does not completely recover, Angie’s discovery of worth and direction in life leaves the reader with a hopeful ending.
—VOYA

Charlton-Trujillo’s prose has all the muscular self-confidence Angie thinks she lacks. Perhaps channeling both cummings and Block, she fills her pages with startling and often funny wordplay. In an age dominated by bland, first-person narration, her fresh style stands out and grabs readers in the most pleasing way possible. ... It’s impossible not to love Angie.
—Kirkus Reviews Online

This is a novel of many dimensions... [It] is filled with so many different elements that it will appeal to a wide range of readers.
—Library Media Connection

Beautifully written, dark and wildly funny, this book will have you crying, raging and cheering.
—Waking Brain Cells

Angie deals with some very heavy situations — war, death, first love, addiction, and alienation — but her perspective and attitude are so fresh and novel that the book transcends 'issues' status and registers as a bona fide original. Highly recommended.
—The Philadelphia Inquirer