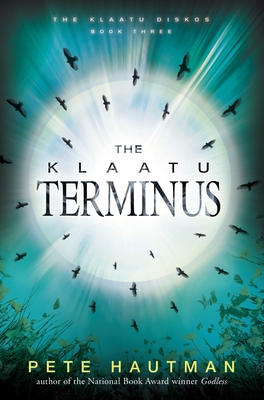 This is book number 3 in the Klaatu Diskos series.

In a far distant future, Tucker Feye and the inscrutable Lia find themselves atop a crumbling pyramid in an abandoned city. In present-day Hopewell, Tucker’s uncle Kosh faces armed resistance and painful memories as he attempts to help a terrorized woman named Emma, who is being held captive by a violent man. And on a train platform in 1997, a seventeen-year-old Kosh is given an instruction that will change his life, and the lives of others, forever. Tucker, Lia, and Kosh must evade the pursuit of maggot-like Timesweeps, battle Master Gheen’s cult of Lambs, all while they puzzle out the enigmatic Boggsians as they search for one another and the secrets of the diskos. Who built them? Who is destroying them? Where — and when — will it all end?

Pete Hautman is the author of many books for young adults and adults, including the National Book Award–winning Godless and the time-travel adventure Mr. Was. Pete Hautman splits his time between Wisconsin and Minnesota.

A dazzlingly imaginative science-fiction trilogy, spanning the rise and fall of religions, civilizations and the human race itself.
—Kirkus Reviews

Hautman’s series is action-packed and his characters come to life on the page.
—VOYA

This one is the most personal of the three books, filling in Tucker’s family history... Pulling together the elaborate strands of the first two books, the concluding volume rewards readers with a surprising yet cogent and satisfying chronicle across time.
—The Horn Book

The action is fast-paced with settings alternating between the small rural towns of the close past, and the postapocalyptic jungle of the distant future. ... Ending in a somewhat Twilight Zone eeriness of happily-ever-after, readers will not feel cheated out of the creep factor.
—School Library Journal

Readers who have followed Tucker Feye and Lah Lia in their bounces across time and space will be glad to see them return in this series finale... Other characters who have been important in the first two books are brought into the mix, and Hautman deftly manages to bring their stories together amidst more harrowing danger and intricately timed escapes. ... Hautman closes the series the way a middle-grade sci-fi series should be closed.
—Bulletin of the Center for Children's Books

Through chapters alternating between time periods and narrators, Hautman weaves together a magical tale that leaves readers pondering their own beliefs and purpose long after the book is over. For most, the ending will provide a sense of closure as questions are answered and the genius of Hautman’s story is revealed.
—Library Media Connection