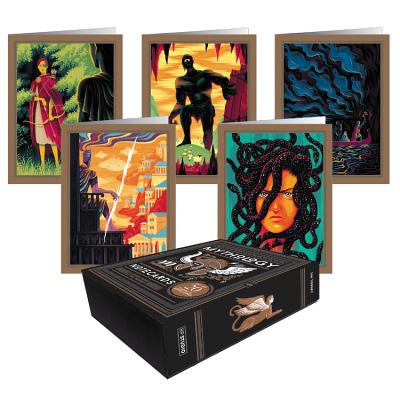 By Jim Tierney (By (artist))


On Our Shelves Now - Please Allow up to 24-48 hours for Curbside Pickup
20 notecards packaged in a magnetic-closure box, featuring the stunning illustrated plates from the 75th Anniversary edition of Mythology by Edith Hamilton.   Send written tales of love and adventure--or maybe just a short note--with this epic collection of 20 notecards illustrated with portraits and scenes of the gods, goddesses, heroes, and heroines of Greek, Roman, and Norse Mythology. MYTHOLOGY NOTECARDS features 5 full-color illustrations specially commissioned and drawn for the 75th anniversary edition of the bestselling classic Mythology by Edith Hamilton, which has sold millions of copies throughout the world.   This set includes: 20 full-color matte-finish notecards (4 each of 5 designs). 20 full-color envelopes, printed on wood-free paper. Magnetic-closure box
Jim Tierney studied illustration at the University of the Arts in Philadelphia.As a designer and illustrator he has worked on covers for Neil Gaiman's American Gods and Anansi Boys, Dante Alighieri's The Divine Comedy, and T.C. Boyle's The Terranauts to name a few. He lives in Brooklyn, NY.