The Ultimate History of Video Games, Volume 1: From Pong to Pokemon and Beyond . . . the Story Behind the Craze That Touched Our Lives and Changed the World (Paperback) 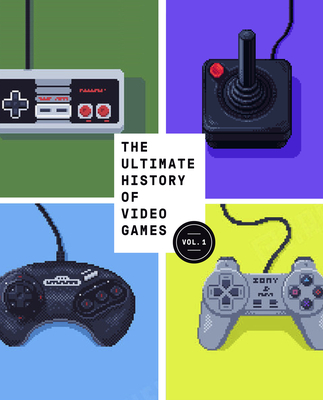 The Ultimate History of Video Games, Volume 1: From Pong to Pokemon and Beyond . . . the Story Behind the Craze That Touched Our Lives and Changed the World (Paperback)

This is book number 1 in the Ultimate History of Video Games series.

“For industry insiders and game players alike, this book is a must-have.”—Mark Turmell, designer for Midway Games and creator of NBA Jam, NFL Blitz, and WrestleMania

With all the whiz, bang, pop, and shimmer of a glowing arcade, volume 1 of The Ultimate History of Video Games reveals everything you ever wanted to know and more about the unforgettable games that changed the world, the visionaries who made them, and the fanatics who played them. Starting in arcades then moving to televisions and handheld devices, the video game invasion has entranced kids and the young at heart for nearly fifty years. And gaming historian Steven L. Kent has been there to record the craze from the very beginning.

The Ultimate History: Volume 1 tells the incredible tale of how this backroom novelty transformed into a cultural phenomenon. Through meticulous research and personal interviews with hundreds of industry luminaries, Kent chronicles firsthand accounts of how yesterday’s games like Space Invaders, Centipede, and Pac-Man helped create an arcade culture that defined a generation, and how today’s empires like Sony, Nintendo, and Electronic Arts have galvanized a multibillion-dollar industry and a new generation of games. Inside, you’ll discover

• the video game that saved Nintendo from bankruptcy
• the serendipitous story of Pac-Man’s design
• the misstep that helped topple Atari’s $2-billion-a-year empire
• the coin shortage caused by Space Invaders
• the fascinating reasons behind the rise, fall, and rebirth of Sega
• and much more!

Entertaining, addictive, and as mesmerizing as the games it chronicles, this book is a must-have for anyone who’s ever touched a joystick.
Steven L. Kent turned a lifelong joystick addiction into a fifteen-year gig writing for outlets like Microsoft News, Boys’ Life, USA Today, the Chicago Tribune, and The Japan Times. In addition to his two-volume account The Ultimate History of Video Games, Kent wrote The Making of Final Fantasy: The Spirits Within and The Making of Doom 3. Also a novelist, he authored the Clone Republic series and co-authored 100 Fathoms Below with Nicholas Kaufmann. He lives in Seattle, Washington.
“A major triumph.”—Next Generation

“A compelling journey through the evolution of the video game industry.”—Minoru Arakawa, former president of Nintendo

“This book is from the horse’s mouth. Finally, the game designers speak out in all their wisdom and stupidity.”—Eugene Jarvis, creator of Defender and Robotron: 2084