Today the World Is Watching You: The Little Rock Nine and the Fight for School Integration, 1957 (Civil Rights Struggles Around the World) (Library Binding) 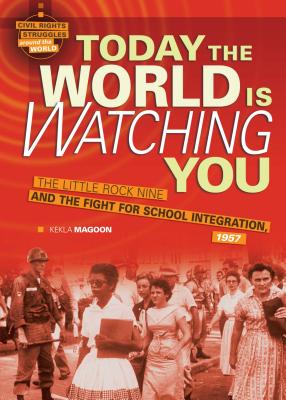 On September 4, 1957, nine African American teenagers made their way toward Central High School in Little Rock, Arkansas. They didn't make it very far. Armed soldiers of the Arkansas National Guard blocked most of them at the edge of campus. The three students who did make it onto campus faced an angry mob. White citizens spit at them and shouted ugly racial slurs. No black students entered Central that day. And if the angry mob had its way, black children would never attend school with white children. But the U.S. Supreme Court had ruled in 1955 that school segregation--that is, separate schools for black children and white children--was unconstitutional. The Court ordered the nation's schools to be integrated. Nowhere was that process more hateful and more horrific than in Little Rock. Eventually, the nine students did make it into Central High--under the protection of army soldiers. Once inside Central, they faced a never-ending torrent of abuse from white students. But the nine students persevered. Their courage inspired the growing movement for African American civil rights.