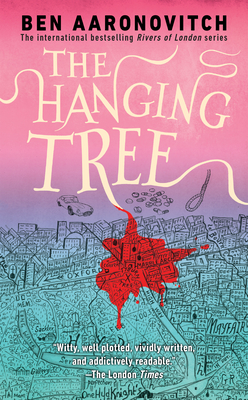 This is book number 6 in the Rivers of London series.

Suspicious deaths are not usually the concern of Police Constable Peter Grant or the Folly—London’s police department for supernatural cases—even when they happen at an exclusive party in one of the flats of the most expensive apartment blocks in London. But the daughter of Lady Ty, influential goddess of the Tyburn river, was there, and Peter owes Lady Ty a favor.

Plunged into the alien world of the super-rich, where the basements are bigger than the houses, where the law is something bought and sold on the open market, a sensible young copper would keep his head down and his nose clean.

But this is Peter Grant we’re talking about.

He’s been given an unparalleled opportunity to alienate old friends and create new enemies at the point where the world of magic and that of privilege intersect. Assuming he survives the week…
Ben Aaronovitch was born in London in 1964 and had the kind of dull routine childhood that drives a man either to drink or to science fiction. He is a screenwriter, with early notable success on BBC's legendary Doctor Who, for which he wrote some episodes now widely regarded as classics, and which even he is quite fond of. After a decade of such work, he decided it was time to show the world what he could really do, and embarked on his first serious original novel. The result is Midnight Riot, the debut adventure of Peter Grant. He can be contacted at his website, http://www.the-folly.com/.
Praise for the Rivers of London series:

"This series is a constant joy to read....I’ve been looking forward all year to find out what happened next, and the book did not disappoint.” —Genevieve Cogman, author of acclaimed The Invisible Library