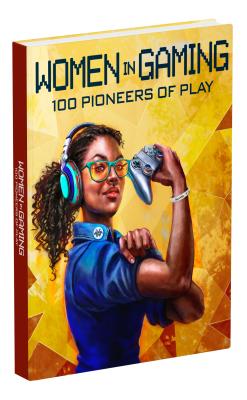 
Email for availability
Featuring intriguing interviews from 100 influential women in gaming, learn how women have played -- and will continue to play -- important roles in the burgeoning video game industry.

Women in Gaming: 100 Professionals of Play is a celebration of women's accomplishments in the video game industry, ranging from high-level executives to programmers to pro-gamers. This insightful and celebratory book highlights women who helped establish the industry, women who disrupt it, women who fight to diversify it, and young women who will someday lead it. Featuring household names and unsung heroes, each individual profiled plays an important role in the gaming industry.

A select few of the remarkable women featured in this book include:

100 Professionals of Play: Interviews and Special Features with 100 diverse and prominent women highlighting their impact on the gaming industry in the fields of design, programming, animation, marketing, voiceover, and many more.

Pro Tips: Practical and anecdotal advice from industry professionals for young adults working toward a career in the video game industry.

Essays: Short essays covering various topics affecting women in gaming related careers, including "Difficult Women: The Importance of Female Characters Who Go Beyond Being Strong," "NPC: On Being Unseen in the Game Dev Community," and "Motherhood and Gaming: How Motherhood Can Help -- Not Hurt -- a Career."

"A Day in the Life of" Features: An inside look at a typical day in the gaming industry across several vocations, including a streamer, a voice actor, and many more.
Meagan Marie is an industry veteran with experience on both the press and production sides of making games. Previously at Game Informer Magazine and Riot Games, she is now the longtime Senior Community & Social Media Manager at Crystal Dynamics. Focused on the Tomb Raider franchise, Meagan has been responsible for establishing and evolving the brand presence on social media, engaging with fans online and at events worldwide, and acting as a studio spokesperson.

Inspired to use her platform to give back, Meagan is outspoken on issues of representation in gaming and pop culture. She is also the founder of the Causeplay Shop, which uses her platform as an international cosplay guest to unite cosplayers and geek artists for sales that benefit charitable causes.