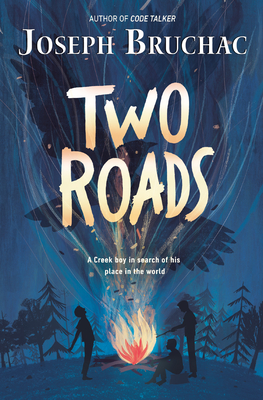 It's 1932, and twelve-year-old Cal Black and his Pop have been riding the rails for years after losing their farm in the Great Depression. Cal likes being a "knight of the road" with Pop, even if they're broke. But then Pop has to go to Washington, DC--some of his fellow veterans are marching for their government checks, and Pop wants to make sure he gets his due--and Cal can't go with him. So Pop tells Cal something he never knew before: Pop is actually a Creek Indian, which means Cal is too. And Pop has decided to send Cal to a government boarding school for Native Americans in Oklahoma called the Challagi School.

At school, the other Creek boys quickly take Cal under their wings. Even in the harsh, miserable conditions of the Bureau of Indian Affairs boarding school, he begins to learn about his people's history and heritage. He learns their language and customs. And most of all, he learns how to find strength in a group of friends who have nothing beyond each other.
Joseph Bruchac is a highly acclaimed children’s book author, poet, novelist, and storyteller, as well as a scholar of Native American culture. He is the coauthor of the bestselling Keepers of the Earth series with Michael Caduto. Bruchac's poems, articles, and stories have appeared in hundreds of publications from Akwesasne Notes and American Poetry Review to National Geographic and Parabola. He has authored many books for adults and children including Code Talker: A Novel about the Navajo Marines of World War Two, Skeleton Man, and The Heart of a Chief.
Praise for Two Roads

"Cal's cleareyed first-person narration drives the novel. Meticulously honest, generous, autonomous and true, he sees things for what they are rather than what he'd like them to be. The result is one of Bruchac's best books." —New York Times Book Review