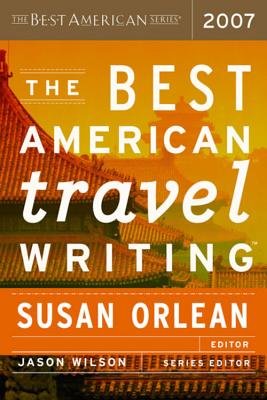 
Available from Our Distributor (Not in Store)
“Travel is not about finding something. It’s about getting lost -- that is, it is about losing yourself in a place and a moment. The little things that tether you to what’s familiar are gone, and you become a conduit through which the sensation of the place is felt.” -- from the introduction by Susan Orlean

The twenty pieces in this year’s collection showcase the best travel writing from 2006. George Saunders travels to India to witness firsthand a fifteen-year-old boy who has been meditating motionless under a tree for months without food or water, and who many followers believe is the reincarnation of the Buddha. Matthew Power reveals trickle-down economics at work in a Philippine garbage dump. Jason Anthony describes the challenges of everyday life in Vostok, the coldest place on earth, where temperatures dip as low as minus-129 degrees and where, in midsummer, minus-20 degrees is considered a heat wave.

David Halberstam, in one of his last published essays, recalls how an inauspicious Saigon restaurant changed the way he and other reporters in Vietnam saw the world. Ian Frazier analyzes why we get sick when traveling in out-of-the-way places. And Kevin Fedarko embarks on a drug-fueled journey in Djibouti, chewing psychotropic foliage in “the worst place on earth.”

Closer to home, Steve Friedman profiles a 410-pound man who set out to walk cross-country to lose weight and find happiness. Rick Bass chases the elusive concept of the West in America, and Jonathan Stern takes a hilarious Lonely Planet approach to his small Manhattan apartment.

JASON WILSON, series editor, is the author of Godforsaken Grapes, Boozehound, and The Cider Revival. He is the creator of the newsletter and podcast Everyday Drinking. Wilson has been the series editor of The Best American Travel Writing since its inception in 2000. His work can be found at jasonwilson.com.