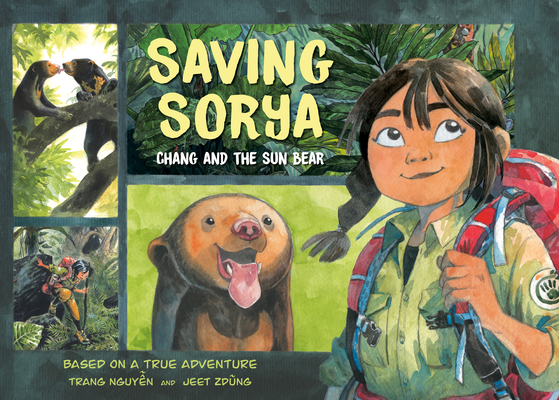 
Available from Our Distributor (Not in Store)
* "Nguyen’s heartfelt tale is perfect for animal-loving fans of Katherine Applegate’s The One and Only Ivan and Rosanne Parry’s A Wolf Called Wander."—School Library Journal, starred review

An Eisner-nominated middle grade graphic novel adventure based on a true story, in which a young conservationist overcomes the odds to save and return a sun bear to its natural habitat.

When endlessly curious and tenacious Chang discovers a bear bile farm near her home in Vietnam, she decides to do everything she can to save wild animals—by becoming a conservationist! After teaching herself survival skills, documenting each rainforest plant and animal she sees in her field notebook, and disproving the critics who think she isn’t old enough or strong enough, Chang is finally accepted as a rescue center volunteer. But her toughest challenge yet comes when she’s tasked with returning Sorya—the sun bear she raised from infancy—back into the wild. Because despite being a different species, Sorya is Chang’s best friend. And letting a friend go is never easy . . . even when it’s the right thing to do.

With breathtaking art and STEM facts galore, Chang’s daring story is for any young reader, animal lover, and intrepid explorer!
Trang Nguyen, born in Vietnam, knew from a young age that she wanted to be a wildlife conservationist and environmental activist. She obtained her PhD in Biodiversity Management from the University of Cambridge and is the founder and CEO of WildAct, a non-profit that helps monitor illegal wildlife trade markets. For her advocacy, Nguyen was awarded the prestigious Future for Nature Award in 2018 and named by the BBC as one of the 100 most inspiring and influential women of 2019. This is her first children's book.

* “Uplifting . . . the epitome of wild and free. . . . Breathtaking visuals and a compelling story.”—Kirkus Reviews, starred review

“A perfect pick for animal lovers and young conservationists.”—Booklist