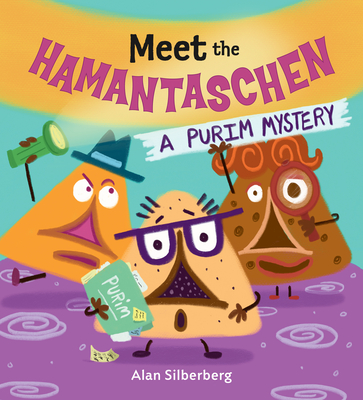 
Available from Our Distributor (Not in Store)
You've met the latkes, you've met the matzah...now it's time to meet the hamantaschen in this zany Purim story!

There's a problem with Purim!

The Purim play is about to start, but the megillah is missing! Without the scroll that recounts the Purim story, how can the show go on? Never fear: three determined hamantaschen—

Right. Three determined DETECTIVES are on the case. With the help of a mysterious stranger and a few disguises, the detectives uncover the facts so the true story of Purim can be told.

In this companion to Meet the Latkes and Meet the Matzah, holiday mistellings have never been so fun.
Alan Silberberg (www.silberbooks.com) is an award-winning author, cartoonist, and children's TV creator who has worked with Nickelodeon and Disney. He's the author and illustrator of three previous middle grade novels, including Milo: Sticky Notes and Brain Freeze, which won the Sid Fleischman Humor Award and is currently in development to become an animated TV series. Meet the Latkes was Alan's debut picture book, followed by Meet the Matzah.
PRAISE FOR MEET THE HAMANTASCHEN:

"A fun and foodie-friendly parody that illuminates the origin of the Purim festival for young readers."—Kirkus Reviews

"A creative picture book that uses humor to teach children about Purim and its lessons of courage."—School Library Journal


PRAISE FOR MEET THE MATZAH:


PRAISE FOR MEET THE LATKES:

"Readers who like their humor broad and goofy will lap this up, and Silberberg...makes it extra tasty with sprawling and genially messy cartooning that looks like it was created by someone hopped up on chocolate gelt."—Publishers Weekly

"Silberberg details the daily events with Wimpy Kid-like drawings and quick-witted humor that will keep the pages turning."—School Library Journal

"A read with one goal on its mind: entertainment."—Booklist