A Dash of Salt and Pepper (Paperback) 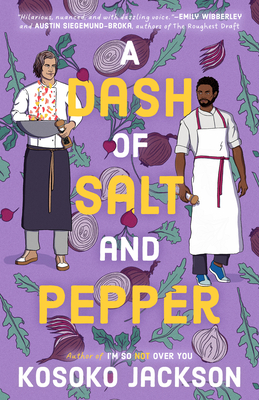 A Dash of Salt and Pepper (Paperback)

Sometimes two cooks in the kitchen are better than one in this swoony romantic comedy from the author of I’m So (Not) Over You.

Xavier Reynolds is doing less than stellar. He just got dumped, was passed over for a prestigious fellowship, and to top it all off he's right back home in Harper's Cove, Maine (population: 9,000). The last thing he wants to do is to work as a prep chef in the kitchen of the hip new restaurant in town, The Wharf. Especially since the hot, single-father chef who owns it can’t delegate to save his life.

Logan O’Hare doesn’t understand Xavier or why every word out of his mouth is dipped in sarcasm. Unfortunately, he has no choice but to hire him—he needs more help in the kitchen and his tween daughter, Anne, can only mince so many onions. It might be a recipe for disaster, but Logan doesn’t have many options besides Xavier.

Stuck between a stove and a hot place, Logan and Xavier discover an unexpected connection. But when the heat between them threatens to top the Scoville scale, they’ll have to decide if they can make their relationship work or if life has seasoned them too differently.
Kosoko Jackson is a digital-media specialist, who lives in the New York Metro Area and spends too much time listening to Halsey and Taylor Swift.

“A Dash of Salt and Pepper serves up a fresh update on the small-town romance with a heaping side of swoon. Hilarious, nuanced and with dazzling voice, Kosoko Jackson’s writing leaves us eager for extra helpings.”—Emily Wibberley and Austin Siegemund-Broka, authors of The Roughest Draft

“Kosoko Jackson cooks up a saucy, sweet, sexy small town romance that made me laugh and swoon in equal measure. Not to be missed.”—Gwenda Bond, New York Times bestselling author of Not Your Average Hot Guy

"A Dash of Salt and Pepper is laugh-out-loud hilarious, bursting with charm and heavy on swoons. Kosoko Jackson vividly captures the quirks of a small coastal town as Xavier and Logan cook their way to the sweetest of happily ever afters. Well-stocked with lovable side characters, I smiled at every single page."—Bridget Morrissey, author of A Thousand Miles

"Sizzling, hilarious, and oh-so-satisfying! A Dash of Salt and Pepper has all the best romance ingredients: a charming small-town setting, a savvy and relatable hero on the precipice of change, and a sexy, gruff love interest who’s good with his hands (and not just in the kitchen). Kosoko Jackson writes delectable rom-coms you can’t help but savor."—Timothy Janovsky, author of Never Been Kissed

"A wonderful small-town romance with a vibrant voice. You'll love spending time with Xavier and Logan in Harper's Cove."—Jackie Lau, author of Donut Fall in Love

"Sparks fly in and out of the kitchen in this age-gap contemporary romance."—Kirkus Reviews