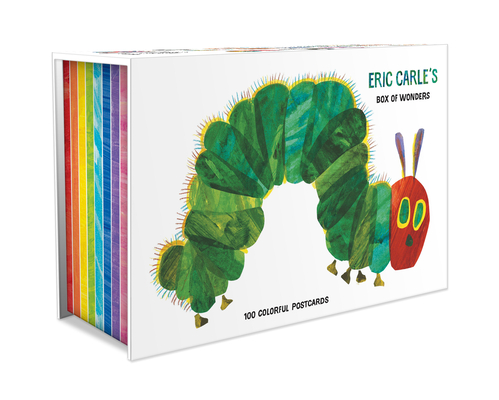 
On Our Shelves Now - Please Allow up to 24-48 hours for Curbside Pickup
100 delightful postcards featuring iconic artwork from Eric Carle's beloved children's books, including The Very Hungry Caterpillar and Brown Bear, Brown Bear, What Do You See?

This box of 100 postcards is both a celebration of Eric Carle's most beloved storybook characters and a colorful explosion of nostalgia. Fifty pieces of Carle's vibrant artwork are printed on hefty, glossy cards, capturing the brightness and warmth of The Very Hungry Caterpillar; Brown Bear, Brown Bear, What Do You See?; The Grouchy Ladybug; The Mixed-Up Chameleon; and more. Each design is printed twice so you can keep one and send one.

Send cards to friends and family, use them as gift tags or in craft projects, or frame and keep them for yourself!
Eric Carle is acclaimed and beloved as the creator of brilliantly illustrated and innovatively designed picture books for very young children. His best-known work, The Very Hungry Caterpillar, has been translated into 70 languages and sold over 55 million copies. Carle illustrated more than seventy books, many best sellers, most of which he also wrote, and more than 170 million copies of his books have sold around the world. In 2003, Carle received the Laura Ingalls Wilder Award (now called the Children’s Literature Legacy Award) for lifetime achievement in children's literature. In 2002, Eric and his wife, Barbara, cofounded The Eric Carle Museum of Picture Book Art in Amherst, Massachusetts, a 40,000-square-foot space dedicated to the celebration of picture books and picture book illustrations from around the world, underscoring the cultural, historical, and artistic significance of picture books and their art form. Eric Carle passed away in May 2021 at the age of 91. His work remains an important influence on artists and illustrators at work today.