Vows of Empire: Book Three of The Bloodright Trilogy (Hardcover) 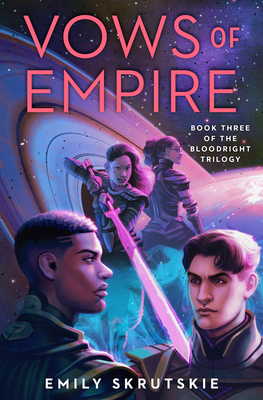 Vows of Empire: Book Three of The Bloodright Trilogy (Hardcover)

This is book number 3 in the The Bloodright Trilogy series.

Two young princes on opposite sides of a war must decide between loyalty and love in this galaxy-shaking finale of the Bloodright Trilogy.

“Skrutskie handily sticks the landing. Series fans are sure to be pleased.”—Publishers Weekly

Gal and Ettian have never been farther apart. Once, they were roommates and best friends, each suffocating under a secret of galactic consequence. When Gal’s came to light—that he was heir to the Umber Empire and all of its brutal conquest—the two were forced to flee their military academy, fall in with a brewing rebellion to reclaim the Archon Empire from Umber’s grasp, and face their long-held feelings for each other.

Then the rebellion discovered Gal’s identity and to save his life, Ettian had no choice but to unveil his own secret: that he was the long-lost heir to the Archon throne. With Gal as a political prisoner, Ettian began the fight to restore his own empire—and to open Gal’s eyes to the possibility of a galaxy reclaimed from Umber’s greed. But just when Gal was starting to come around, a team of Umber operatives rescued him from Archon’s clutches and dragged him home to take up his crown.

Now, separated for the first time and in full command of the might of their respective forces, the star-crossed rulers find themselves truly at odds. And with the war reaching a tipping point, the time has finally come for Gal and Ettian to confront what they owe their empires, their friends, and each other if they’re ever to forge a universe where the two of them can be together.
Emily Skrutskie was born in Massachusetts, raised in Virginia, and forged in the mountains above Boulder, Colorado. She attended Cornell University and now lives and works in Los Angeles. Skrutskie is the author of Oaths of Legacy, Bonds of Brass, Hullmetal Girls, The Abyss Surrounds Us, and The Edge of the Abyss.
Praise for Vows of Empire

“Vows of Empire was a thoroughly enjoyable read and everything it needed to be to conclude the series. Not only is this trilogy worth the time to read, but it is one of those legendary series that is worth a reread. Again. And again.”—Teresa Crider, creative writer

“A good blend of worldbuilding, fast-paced action, intrigue, but, most of all, complicated relationships . . . Those who enjoy exciting Young Adult LGBT Sci-fi or Space Opera should definitely give it a go.”—Books of My Heart

“Vows of Empire neatly wraps up the Bloodright Trilogy, providing satisfying endings for its trio. . . . Worth every second.”—Wealth of Geeks

“Readers will easily jump back into the complex political machinations of Skrutskie’s beautifully detailed world. . . . Skrutskie handily sticks the landing. Series fans are sure to be pleased.”—Publishers Weekly

Praise for Oaths of Legacy

“Oaths of Legacy is a wildly thrilling and fast-paced sci-fi adventure, and equal parts a heart-wrenching romance torn asunder by bloodrights and galactic war.”—Your Money Geek

“Skrutskie is a master of perspective.”—But Why Tho?

“Gays. In. Space!!”—Sam Maggs, author of Tell No Tales: Pirates of the Southern Seas

“Skrutskie sets her characters’ competing political and personal motivations against stellar battle scenes. . . . An engaging narrative that should satisfy existing fans and new readers alike. Recommended for fans of anime-inspired space opera and readers looking for queer relationships in their sf sagas.”—Booklist


Praise for Bonds of Brass

“A fast-paced space opera with heart and style, Bonds of Brass had me screaming KISS ALREADY on every page.”—Delilah S. Dawson, New York Times bestselling author of Star Wars: Phasma

“Fast ships, quick decisions, a new friend who likes to blow stuff up, and a love story with empires at stake: This story’s got it all.”—Kevin Hearne, New York Times bestselling author of A Plague of Giants and the Iron Druid Chronicles