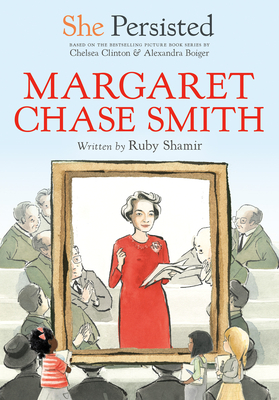 
Available from Our Distributor (Not in Store)
Inspired by the #1 New York Times bestseller She Persisted by Chelsea Clinton and Alexandra Boiger comes a chapter book series about women who stood up, spoke up and rose up against the odds--including Margaret Chase Smith!

In this chapter book biography by award-winning author Ruby Shamir, readers learn about the amazing life of Margaret Chase Smith--and how she persisted.

Margaret Chase Smith liked to help people, and she knew she could do that as a member of Congress. She became the first woman to serve in both the House and the Senate, where she supported the space program and more opportunities for women. Her hard work and success helped pave the way for generations of women after her to run for office!

Complete with an introduction from Chelsea Clinton and a list of ways that readers can follow in Margaret Chase Smith's footsteps and make a difference!

And don’t miss out on the rest of the books in the She Persisted series, featuring so many more women who persisted, including Sonia Sotomayor, Sally Ride, and more!

"An important addition to the biography section of any library." --School Library Journal
Ruby Shamir (rubyshamir.com) is an award-winning children's book author whose titles include the What's the Big Deal About . . . American history and civics series. She previously worked in government and politics--in the White House, in the U.S. Senate, and on a bunch of campaigns--and writes to share with readers what she learned about civic engagement in those roles. She lives in the Bronx, New York, with her husband and three children. Follow her on Twitter @ruby_shamir.

Chelsea Clinton is the author of the #1 New York Times bestseller She Persisted: 13 American Women Who Changed the World; She Persisted Around the World: 13 Women Who Changed History; She Persisted in Sports: American Olympians Who Changed the Game; Don't Let Them Disappear: 12 Endangered Species Across the Globe; It's Your World: Get Informed, Get Inspired & Get Going!; Start Now!: You Can Make a Difference; with Hillary Clinton, Grandma's Gardens and Gutsy Women; and, with Devi Sridhar, Governing Global Health: Who Runs the World and Why? She is also the Vice Chair of the Clinton Foundation, where she works on many initiatives, including those that help empower the next generation of leaders. She lives in New York City with her husband, Marc, their children and their dog, Soren. You can follow Chelsea Clinton on Twitter @ChelseaClinton or on Facebook at facebook.com/chelseaclinton.

Gillian Flint (gillianflint.com) is an illustrator who has a passion for painting in watercolors. She has been drawing and creating characters for as long as she can remember. Her work has been published in the USA, the UK and Australia. In her spare time she enjoys reading and gardening at her home in the UK. You can follow her on Instagram @gillianflint_illustration.

Alexandra Boiger (alexandraboiger.com) has illustrated nearly twenty picture books, including the She Persisted series by by Chelsea Clinton; the popular Tallulah series by Marilyn Singer; and the Max and Marla books, which she also wrote. Originally from Munich, Germany, she now lives outside of San Francisco, California, with her husband, Andrea; daughter, Vanessa; and two cats, Luiso and Winter. You can follow Alexandra on Instagram @alexandra_boiger.
Praise for She Persisted: Margaret Chase Smith:

"An important addition to the biography section of any library." --School Library Journal