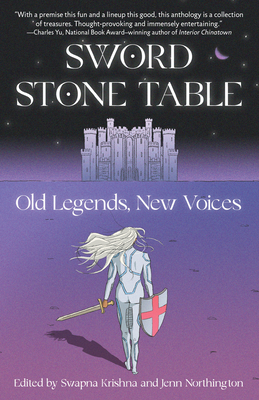 From the vast lore surrounding King Arthur, Camelot, and the Knights of the Round Table, comes an anthology of gender-bent, race-bent, LGBTQIA+ inclusive retellings.

Here you’ll find the Lady of the Lake reimagined as an albino Ugandan sorceress and the Lady of Shalott as a wealthy, isolated woman in futuristic Mexico City; you'll see Excalibur rediscovered as a baseball bat that grants a washed-up minor leaguer a fresh shot at glory and as a lost ceremonial drum that returns to a young First Nations boy the power and the dignity of his people. There are stories set in Gilded Age Chicago, '80s New York, twenty-first century Singapore, and space; there are lesbian lady knights, Arthur and Merlin reborn in the modern era for a second chance at saving the world and falling in love—even a coffee shop AU.

Brave, bold, and groundbreaking, the stories in Sword Stone Table will bring fresh life to beloved myths and give long-time fans a chance to finally see themselves in their favorite legends.

SWAPNA KRISHNA is a space, technology, and pop culture writer and journalist. Her work has been published at Engadget, The Verge, Polygon, StarTrek.com, StarWars.com, The A.V. Club, and more. You can find her on Twitter at @skrishna.

JENN NORTHINGTON is a former bookseller and a current reviewer, podcaster, and editor with Riot New Media Group. She's a lifelong book nerd and can be found primarily on Instagram at @iamjennIRL.

“Sword Stone Table is an anthology with a lot to say. It is an ambitious, thematically-sound anthology, with a robust central thesis. . . . A labour of love—a carefully-assembled ‘Round Table’ of eclectic creative talents all writing on one of fantasy’s most established tropes. This is a thematic anthology that doesn’t simply concatenate random stories, but has a lot to say as a text in its own right.”
—Jared Shurin, Tor.com

“Intriguing. . . . As with any great compilation of stories, Sword Stone Table lends itself to being picked up and perused at one’s leisure. . . . the stories in Sword Stone Table certainly are . . . up to Sir Thomas Malory’s level.”
—Drew Gallagher, The Free Lance-Star

“This collection revisits the Arthurian mythos through a variety of perspectives that make even the most familiar stories yield new fruit. . . . . Whether or not the reader is familiar with the intricacies of Arthurian tales, each of these new additions is well worth savoring—these are legends that don’t just allow the gender-bending, race-bending, and queering that the editors aimed for, they flourish with the additions.”
—Regina Schroeder, Booklist

“An anthology of some of the best writers working today—people like Danny Lavery, Ken Liu, and Silvia Moreno-Garcia—re-imagining Arthurian legends from all different kinds of marginalized perspectives, in all different kinds of times and places. . . . A great read even if you, like me, only know the basics when it comes to King Arthur.”
—Petra Mayer, WBUR

“This singular anthology will enchant with its bright, shiny new takes on medieval classics including more genders, more races, more eras, and more fabulousness than ever before.”
—Karla Strand, Ms. Magazine

“An anthology of breathtaking breadth, depth, and creativity. . . . There isn’t a bad story in the bunch, and the anthology offers such a variety of style, theme, and genre that die-hard Arthurian fans and more casual readers will be equally delighted. This is a must-read.”
—Publishers Weekly (starred review)

“Editors Krishna and Northington have brought together a selection of quietly moving and well-paced stories, spanning the historic past and the distant future. A highly creative and enchanting anthology.”
—Kristi Chadwick, Library Journal (starred review)

“Compelling. . . . The collection takes readers across time and cultures, breathing new life into one of the oldest Western myths. . . . . Sure to please fans of Arthurian legend.”
—Suzanne Krohn, Shelf Awareness

“With a premise this fun and a lineup this good, this anthology is a collection of treasures, to be marveled at and admired. Thought-provoking and immensely entertaining.”
—Charles Yu, National Book Award-winning author of Interior Chinatown

"Each tale in Sword Stone Table is a piece of sorcery. Each remakes the legend of the once and future king—a historical story of larger-than-life people who could have existed, and perhaps did—to include those whom the original excluded. In place of rich and beautiful straight white people we have an Islamic law judge; women of all ages, sizes, and shapes; an albino Ugandan sorceress (and her nonbinary cat); the working poor; queer folk; BIPOC drummers, students, and isolated wealthy; and those who think they can never live up to their parents' standards of success. Each tale remakes the legend of what could have been into something that should have been. Stories are magic, so perhaps as we read this wonderful collection they will reweave our world into one in which they were, are, or will become true."
—Nicola Griffith, author of Hild and So Lucky