Murder, Magic, and What We Wore (Library Binding) 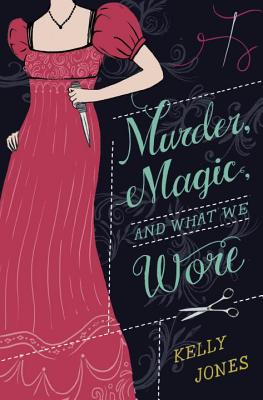 Murder, Magic, and What We Wore (Library Binding)


Email for availability
Fans of Patrice Kindl’s Keeping the Castle or Patricia C. Wrede and Caroline Stevermer’s Sorcery and Cecelia will adore this funny Regency-era mystery about a determined young woman with a magical trick up her sleeve . . .

The year is 1818, the city is London, and 16-year-old Annis Whitworth has just learned that her father is dead and all his money is missing. And so, of course, she decides to become a spy.

Annis always suspected that her father was himself a spy, and following in his footsteps to unmask his killer makes perfect sense. Alas, it does not make sense to England’s current spymasters—not even when Annis reveals that she has the rare magical ability to sew glamours: garments that can disguise the wearer completely.

Well, if the spies are too pigheaded to take on a young woman of quality, then Annis will take them on. And so she crafts a new double life for herself. Miss Annis Whitworth will appear to live a quiet life in a country cottage with her aunt, and Annis-in-disguise as Madame Martine, glamour artist, will open a magical dressmaking shop. That way she can earn a living, maintain her social standing, and, in her spare time, follow the coded clues her father left behind and unmask his killer.

It can’t be any harder than navigating the London social season, can it?

“Murder, Magic, and What We Wore blew my bonnet off. Kelly Jones has found a fresh way to share the delights of the magical regency. I truly love this book!” —Caroline Stevermer, coauthor of Sorcery & Cecilia, or the Enchanted Chocolate Pot

“A deliciously enchanting adventure full of magic, mystery and delight.” —Stephanie Burgis, author of Kat, Incorrigible
KELLY JONES has worked as a librarian and a bookseller, and now turns her talents to fiction. Her first book, Unusual Chickens for the Exceptional Poultry Farmer, was an Indies Introduce Pick, an ALA Notable Book, an SLJ Best Book, a Kirkus Reviews Best Book. You can find her at her website: curiosityjones.net, or on Twitter: @curiosityjones.
Praise for Murder, Magic, and What We Wore:

"A cross between Jane Austen dramas and Harriet the Spy, this delightful strong female–led title mixes historical fiction and spy mystery with a touch of magic to produce a story filled with adventure. Jones infuses her female characters with boldness, intelligence, and wit. Refreshing." —School Library Journal, starred review

"Charming in a way that feels as sweetly ingenuous as its heroine." —Christian Science Monitor

“Murder, Magic, and What We Wore blew my bonnet off. Kelly Jones has found a fresh way to share the delights of the magical regency. I truly love this book!” —Caroline Stevermer, coauthor of Sorcery & Cecilia, or the Enchanted Chocolate Pot

"A great deal of fun, one stitch at a time." —Kirkus Reviews

"A touch of Jane Austen, a dash of adventure, and just a hint of magic make it shine." —Booklist

"Funny and thrilling. A great choice for those who love Regency romances and adventurous heroines." -- VOYA

"More than a clever homage to Jane Austen, this novel plucks characters from history, legend, and contemporary middle-grade and YA Regency novels, dropping Easter eggs right and left for readers to discover on their own before finding their sources cited in the author’s note, which forms a must-read list for fans of the period." -- Bulletin

"The heroine's interests prove that bravery and style can go comfortably hand-in-hand." —The Horn Book