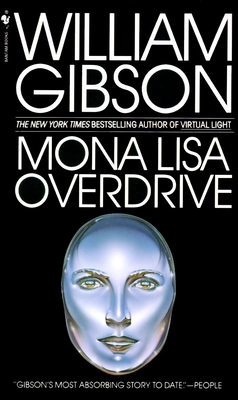 This is book number 3 in the Sprawl Trilogy series.

William Gibson, author of the extraordinary multiaward-winning novel Neuromancer, has written his most brilliant and thrilling work to date . . .The Mona Lisa Overdrive.

Enter Gibson's unique world—lyric and mechanical, sensual and violent, sobering and exciting—where multinational corporations and high tech outlaws vie for power, traveling into the computer-generated universe known as cyberspace.  Into this world comes Mona, a young girl with a murky past and an uncertain future whose life is on a collision course with internationally famous Sense/Net star Angie Mitchell.  Since childhood, Angie has been able to tap into cyberspace without a computer.  Now, from inside cyberspace, a kidnapping plot is masterminded by a phantom entity who has plans for Mona, Angie, and all humanity, plans that cannot be controlled . . . or even known.  And behind the intrigue lurks the shadowy Yazuka, the powerful Japanese underworld, whose leaders ruthlessly manipulate people and events to suit their own purposes . . . or so they think.
William Gibson’s first novel, Neuromancer, won the Hugo Award, the Nebula Award, and the Philip K. Dick Award. He is the New York Times bestselling author of Count Zero, Burning Chrome, Mona Lisa Overdrive, Virtual Light, Idoru, All Tomorrow’s Parties, Pattern Recognition, Spook Country, Zero History, Distrust That Particular Flavor, and The Peripheral. He lives in Vancouver, British Columbia, with his wife.