Babe Didrikson Zaharias: The Making of a Champion (Paperback) 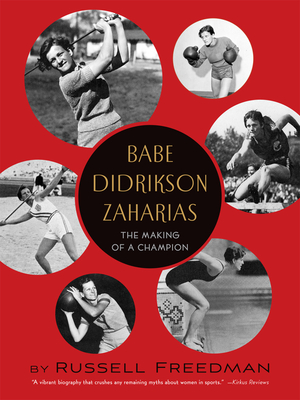 Babe Didrikson Zaharias: The Making of a Champion (Paperback)


Available from Our Distributor (Not in Store)
“Befitting a champion.”—School Library Journal, starred review

Babe Didrikson Zaharias was one of history's greatest athletes as an All-American basketball player, an Olympic gold medalist in track and field, and a championship golfer who won eighty-two amateur and professional tournaments. She was elected Woman Athlete of the Year six times, and in 1950 was named Woman Athlete of the Half Century. This insightful and well-researched biography from a Newbery medalist brings to life the woman who changed the perception of female athletes forever.
Russell Freedman (1929-2018) received the Newbery Medal for Lincoln: A Photobiography. He was the recipient of three Newbery Honors, a National Humanities Medal, the Sibert Medal, the Orbis Pictus Award, and the Laura Ingalls Wilder Award, and was selected to give the 2006 May Hill Arbuthnot Honor Lecture. Mr. Freedman lived in New York City and traveled widely to research his books.

The best athlete of the 20th century may have been Babe Didrickson Zaharias, who appears in a vibrant biography that crushes any remaining myths about women in sports. Freedman (Martha Graham, 1998, etc.) makes clear that almost from Babe's birth in 1911, in an era in which women were barely accepted in sports, she displayed phenomenal athletic ability and determination to become a champion in every sport she played. She was so consumed by sports that she played baseball with boys who were glad to have her, and went on to win two gold medals and one silver medal at the 1932 Olympics, a performance that brought her a enduring national celebrity. Her colorful personality lights up the narrative at every turn and in every story, e.g., after fighting for the right to play golf against socialites who didn't want her, she became, arguably, the best golfer who ever lived. Even with her natural ability Babe still trained at an almost inhuman level. Her insistence on victory was matched by a love of life that sparkles through the book; her story, as told by Freedman and supported by a profusion of black-and-white photographs, leaves readers wondering what she could have done in a less restrictive era and who will follow in the path she blazed. Kirkus Reviews

"Freedman is an expert biographer whose work should be purchased by all young adult collections." VOYA (Voice of Youth Advocates) —