The Private Life of the Cat Who... (Cat Who Short Stories #3) (Mass Market) 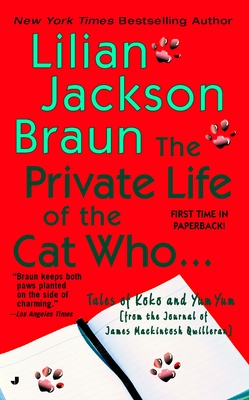 The Private Life of the Cat Who... (Cat Who Short Stories #3) (Mass Market)

This is book number 3 in the Cat Who Short Stories series.

A collection of short stories starring Koko and Yum Yum—the fantastic feline duo from the bestselling Cat Who series.

What could be more purrfect for fans of the Cat Who series than an intimate look at the private lives of those extraordinary Siamese cats Koko and Yum Yum—the most unlikely, most unusual, most delightful team in detective fiction!

In this charming collection of feline antics, you’ll discover why Jim Qwilleran considers Koko a veritable clone of T.S. Eliot’s Rum Tum Tugger, how Yum Yum was rescued from a burglar who is not above a spot of catnapping, and many more fascinating catly facts...

“The feelings produced by reading about Qwill and his pals can best be compared to that coziest of feelings—having a purring cat on your lap.”—Booklist
The history of Lilian Jackson Braun is perhaps as exciting and mysterious as her novels. Between 1966 and 1968, she published three novels to critical acclaim: The Cat Who Could Read Backwards, The Cat Who Ate Danish Modern, and The Cat Who Turned On and Off.  In 1966, the New York Times labeled Braun, “the new detective of the year.” Then, for reasons unknown, the rising mystery author disappeared from the publishing scene. It wasn’t until 1986 that Berkley Publishing Group reintroduced Braun to the public with the publication of an original paperback, The Cat Who Saw Red. Within two years, Berkley released four new novels in paperback and reprinted the three mysteries from the sixties. Since then, G.P. Putnam’s Sons has published seventeen additional novels in the Cat Who series. Braun passed away in 2011.
Praise for Lilian Jackson Braun and the Cat Who series