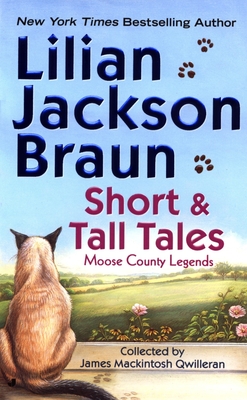 This is book number 2 in the Cat Who Short Stories series.

Fictional columnist James Qwilleran has finally completed his book showcasing the stories related to him by residents of Moose County—that famous region 400 miles north of everywhere. With an introduction by Lilian Jackson Braun, this delightful volume that reveals the offbeat “history” of Moose County is a treat for old and new fans alike.

“Fans of Lilian Jackson Braun’s The Cat Who... series won’t want to miss Short and Tall Tales. In the voice of Qwill, her beloved fictional journalist, Braun presents twenty-seven amusing yarns.”—Publishers Weekly
The history of Lilian Jackson Braun is perhaps as exciting and mysterious as her novels. Between 1966 and 1968, she published three novels to critical acclaim: The Cat Who Could Read Backwards, The Cat Who Ate Danish Modern, and The Cat Who Turned On and Off.  In 1966, the New York Times labeled Braun, “the new detective of the year.” Then, for reasons unknown, the rising mystery author disappeared from the publishing scene. It wasn’t until 1986 that Berkley Publishing Group reintroduced Braun to the public with the publication of an original paperback, The Cat Who Saw Red. Within two years, Berkley released four new novels in paperback and reprinted the three mysteries from the sixties. Since then, G.P. Putnam’s Sons has published seventeen additional novels in the Cat Who series. Braun passed away in 2011.
Praise for Lilian Jackson Braun and the Cat Who series