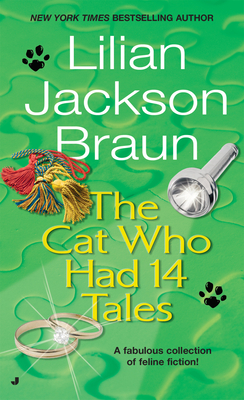 This is book number 1 in the Cat Who Short Stories series.

The New York Times bestselling author of the Cat Who mysteries presents a fantastic collection of feline fiction which includes fourteen short stories about kitties who just can’t keep their whiskers out of trouble...

Filled with furballs like a courageous Siamese who bags a cunning cat burglar, a country kitty who proves a stumbling block in a violent murder, and an intuitive feline whose premonition helps solve the case of the missing antiques dealer, this collection will delight cat lovers and mystery aficionados alike!

This Collection Includes: Phut Phat Concentrates • Weekend of the Big Puddle • The Fluppie Phenomenon • The Hero of Drummond Street • The Mad Museum Mouser • The Dark One • East Side Story • Tipsy and the Board of Health • A Cat Named Conscience • SuSu and the 8:30 Ghost • Stanley and Spook • A Cat Too Small for His Whiskers • The Sin of Madame Phloi • Tragedy on New Year’s Eve
The history of Lilian Jackson Braun is perhaps as exciting and mysterious as her novels. Between 1966 and 1968, she published three novels to critical acclaim: The Cat Who Could Read Backwards, The Cat Who Ate Danish Modern, and The Cat Who Turned On and Off.  In 1966, the New York Times labeled Braun, “the new detective of the year.” Then, for reasons unknown, the rising mystery author disappeared from the publishing scene. It wasn’t until 1986 that Berkley Publishing Group reintroduced Braun to the public with the publication of an original paperback, The Cat Who Saw Red. Within two years, Berkley released four new novels in paperback and reprinted the three mysteries from the sixties. Since then, G.P. Putnam’s Sons has published seventeen additional novels in the Cat Who series. Braun passed away in 2011.
Praise for Lilian Jackson Braun and the Cat Who series