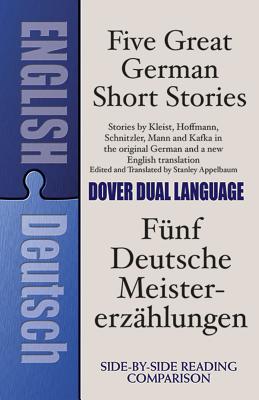 In the 19th century, in the hands of such writers as Heinrich von Kleist and E. T. A. Hoffmann, the short story established itself as one of the most expressive and characteristic genres in German literature. Twentieth-century authors such as Arthur Schnitzler, Thomas Mann, and Franz Kafka continued to deepen and strengthen the tradition.Now five of the finest German short stories -- each a well-known pinnacle of the author's art -- have been specially chosen for this dual-language edition. Reprinted here in the order of their original publication, the stories are: Heinrich von Kleist's The Earthquake in Chile, E. T. A. Hoffmann's The Sandman, Arthur Schnitzler's Lieutenant Gustl, Thomas Mann's Tristan, and Franz Kafka's The Judgment. For each selection, the editor has supplied complete literal English translations on facing pages, along with an introduction to each story and a foreword outlining the evolution of the German short-story genre. Any student of German language or literature will welcome this concise anthology -- as a superb language-learning aid and as a repository of great short fiction.

Stanley Appelbaum served for decades as Dover's Editor in Chief until his retirement in 1996. He continues to work as a selector, compiler, editor, and translator of literature in a remarkable range of languages that includes Spanish, Italian, French, German, and Russian.