The Pawful Truth (Cat in the Stacks Mystery #11) (Mass Market) 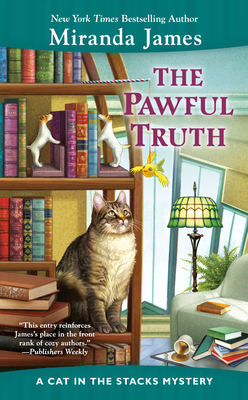 The Pawful Truth (Cat in the Stacks Mystery #11) (Mass Market)


BACKORDERED
When Charlie Harris decides to go back to school, he and his Maine Coon cat, Diesel, find themselves entangled in a deadly lovers quarrel on campus in the latest installment of the New York Times bestselling series.

In addition to his library duties and his role as doting grandad, Charlie has enrolled in  an early medieval history course offered by young, charismatic professor Carey Warriner. Charlie feels a bit out of place- his fellow classmates are half his age- except for Dixie Bell Compton, another ‘mature’ student. When Charlie hears an angry exchange between her and their professor, his interest in piqued. He’s even more intrigued when she shows up at his office asking for a study partner. Charlie turns her down and is saddened to learn just a few days later that Dixie has been killed.

Charlie wonders if Professor Warriner had anything to do with Dixie’s death. Warriner is married to a fellow professor who happens to be a successful author. There are rumors on campus that their marriage was on the rocks. Was Dixie's death the result of a lovers’ triangle gone bad? Charlie soon discovers that the professor’s wife may have some secrets of her own and his suspect list is only getting longer.

As he and Diesel step further into the tangled web of relationships, someone else is viciously killed. Whose jealousy finally erupted into murderous rage? Was it a crime of passion or is there another  more sinister motive? Charlie  races to unravel this mystery: and to draw out the culprit, he may just have to put his own life on the line…
Miranda James is the New York Times bestselling author of the Cat in the Stacks Mysteries, including The Pawful Truth, Six Cats a Slayin', and Claws for Concern, as well as the Southern Ladies Mysteries, including Fixing to Die, Digging Up the Dirt, and Dead with the Wind. James lives in Mississippi.
Praise for the New York Times bestselling Cat in the Stacks Mysteries

"Combines a kindhearted librarian hero, family secrets in a sleepy Southern town, and a gentle giant of a cat that will steal your heart."--Lorna Barrett, New York Times bestselling author of the Booktown Mysteries

"James should soon be on everyone's list of favorite authors."--Leann Sweeney, New York Timesbestselling author of the Cats in Trouble Mysteries

"Every single time I turned out my light for the night, I found myself thinking about the story, flipping the light switch again and reading just 'one more chapter,' until I reached the satisfying conclusion. Run, don't walk, to get your copy today!!"--Myshelf.com

"Ideal for Christie fans who enjoy a good puzzle."--Library Journal

"Humor and plenty of Southern charm...Cozy fans will hope James will keep Charlie and Diesel in action for years to come."--Publishers Weekly