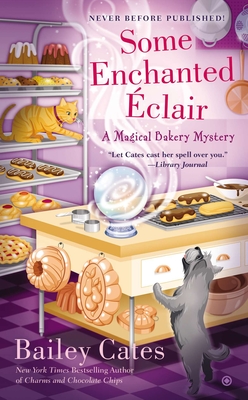 This is book number 4 in the A Magical Bakery Mystery series.

When Hollywood invades Savannah’s historic district to film a Revolutionary War movie, magical baker Katie Lightfoot, and her witches’ coven, the Spellbook Club, take a break from casting spells for casting calls. One of the witches snags a part as an extra, while Katie’s firefighter boyfriend, Declan, acts as on-set security. Katie and her aunt Lucy decide to stay out of the action, but after the movie’s “fixer” fires the caterer, the Honeybee Bakery comes to the rescue, working their magic to keep the hungry crew happy.

But when someone fixes the fixer—permanently—and a spooky psychic predicts Katie will find the killer, the charming baker and her fellow conjurers step in to sift through the suspects…before someone else winds up on the cutting room floor….
Bailey Cates believes magic is all around us if we only look for it. She is the author of the Magical Bakery mysteries, including Charms and Chocolate Chips.
Praise for Bailey Cates and the Magical Bakery mysteries...

“Cates is a smooth, accomplished writer who combines a compelling plot with a cast of interesting characters that are diverse and engaging without falling into simplistic stereotypes…a charming addition to the food-based cozy mystery repertoire, while the story’s magical elements bring a fun, intriguing dimension to the genre.”—Kirkus Reviews

“Cates delivers a tale of magic and mayhem….The mystery plot will have readers guessing ‘whodunit’ all the way to the very end…a great read.”—RT Book Reviews

“Katie is a charming amateur sleuth, baking her way through murder and magic set against the enchanting backdrop of Savannah, Georgia. With an intriguing plot and an amusing cast of characters, Brownies and Broomsticks is an attention-grabbing read that I couldn’t put down.”—New York Times bestselling author Jenn McKinlay

“Let Cates cast her spell over you with this charming debut series entry that brings in the paranormal but never forgets the warmth that cozy readers often request.”—Library Journal

“With a top-notch whodunit, a dark magic investigator working undercover, and a simmering romance in the early stages, fans will relish this tale.”—Gumshoe