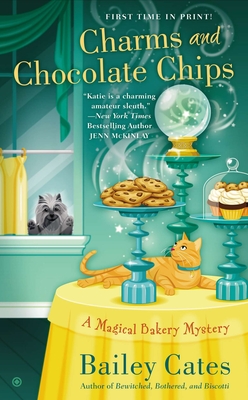 This is book number 3 in the A Magical Bakery Mystery series.

Between brewing magically spiced treats at Honeybee Bakery and volunteering with a local conservation group, Katie Lightfoot barely has time to see her firefighter boyfriend, Declan McCarthy, much less delve further into her destiny as a witch. But avoiding her fate won’t be as easy as whipping up a new recipe—especially when Katie finds herself once again mixed up in murder.

When a fellow volunteer for the conservation group is found dead, Katie’s mystical senses tell her that there’s more to the death than meets the eye. Her suspicions are confirmed when members of her coven are targeted next. Katie will have to embrace her powers quickly...or she may find herself chewed up and spit out by some serious black magic.
Bailey Cates believes magic is all around us if we only look for it. She is the author of the Magical Bakery mysteries.
Praise for the Magical Bakery Mysteries

“A series that is a finely sifted blend of drama, suspense, romance, and otherworldly elements.”—Once Upon a Romance