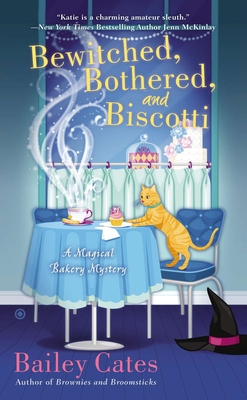 This is book number 2 in the A Magical Bakery Mystery series.

Witchy baker Katie Lightfoot’s search for a killer gets her into a sticky situation with a secret society in this Magical Bakery mystery...

As a new witch—not to mention owner of Savannah’s most enchanting bakery—Katie Lightfoot is still getting used to casting spells, brewing potions, and mastering her magical powers. But that doesn’t mean she can’t find time to enjoy a picnic with firefighter Declan McCarthy…until she stumbles upon a corpse.

The dead man’s tattoo reveals he was a member of a secret society—and it turns out he's missing an object that was very important to the group. When Katie learns the killer was after more than the man's life, she and her Aunt Lucy leave the baked goods on the rack to cool and set off in hot pursuit of a killer.
Bailey Cates believes magic is all around us if we only look for it. She is the New York Times bestselling author of the Magical Bakery Mysteries. Writing as Bailey Cattrell, she is also the author of the Enchanted Garden Mysteries.
Praise for the Magical Bakery Mysteries

“Katie is a charming amateur sleuth, baking her way through murder and magic set against the enchanting backdrop of Savannah, Georgia.”—New York Timesbestselling author Jenn McKinlay

“[The] sixth of the Magical Bakery Mystery series remains as entertaining as the first, with a mythology that is as developed as Katie’s newfound talent and life within the Savannah magical community.”—Kings River Life Magazine

“Ms. Cates has most assuredly found the right ingredients...a series that is a finely sifted blend of drama, suspense, romance, and otherworldly elements.”—Once Upon a Romance

“As a fan of magic and witches in my cozies, Cates’s series remains a favorite.”—Fresh Fiction